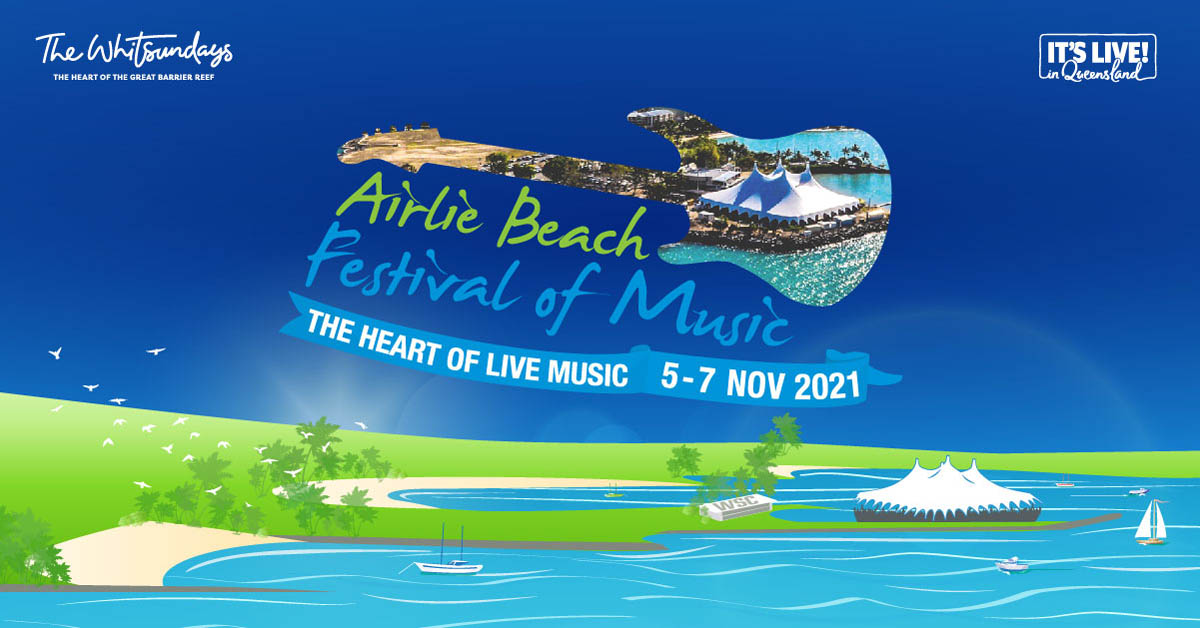 The Airlie Beach Festival of Music is back for 2021!

Few people have felt the impacts of Covid-19 on Australia’s live music industry more than Airlie Beach Festival of Music founder Gavin Butlin. Due to the pandemic, Mr Butlin and his team were forced to cancel the 2020 festival, as well as a host of satellite events for that year, including the national Passport to Airlie competition.

This year, against all odds, the festival is full steam ahead for November 5-7, and the search for Australia’s next big original live music act is now well underway. Mr Butlin said Passport to Airlie heats were kicking off in seven locations across the continent, and he urged music lovers nationwide to support their local entrants, as well as buying tickets to the main event.

“We understand consumer confidence is low across Australia, particularly now that in some states lockdowns have become a way of life, but we are determined to give our stellar all-Australian line-up a platform in paradise to play from and we are committed to bringing live music back to the fans,” he said.

Two Australian icons throwing their support behind Mr Butlin and his cause are Superjesus frontwoman Sarah McLeod and Tania Doko from pop duo Bachelor Girl.

Both have signed up as celebrity judges for the Passport to Airlie finals, where winners from each regional heat will battle it out for the overall title at a festival ‘opener’, hosted by Magnums Hotel in Airlie Beach on Thursday, November 4.

Tania Doko said competitions like the Passport to Airlie were exciting opportunities for today’s new talent, and important from the perspective of audience support. “We all start somewhere so dive in… whatever happens, the experience and connections you’ll make will be unforgettable – and to the music-loving supporters, you are the fuel that helps make the magic happen so thanks for getting involved,” she said.

Having played the main stage at the last festival in 2019, Sarah McLeod said she was looking forward to returning to The Whitsundays, not only as a Passport to Airlie judge, but also for an acoustic, stripped-back set at the official after-party, to be hosted by Northerlies Beach Bar and Grill on Monday, November 8. “The chance to play in the beautiful environment of Airlie Beach is one of the lucky things about being a touring musician – I can’t wait, I adore it up there,” she said.

National Passport to Airlie co-ordinator, Cherrie Hughes, said the validation these two frontwomen brought to the competition was a massive confidence booster for the 125 entrants nationally to date, and much needed in these difficult times. “Hats off to the ladies for stepping up in these roles when the industry needs it most,” she said. “These are bands that have managed to make it through Covid and still be working, which is an achievement in itself, and one I hope the public also supports. If we want to see a new wave of internationally famous Australian acts, we need to be supporting live, original music at the grassroots.”

As well as appealing to the Australian public for support, the Airlie Beach Festival of Music team will soon be reaching out to the business community, with a range of sponsorship opportunities on offer for 2021.

Currently, there are openings for venue and accommodation partners, as well as through bronze, silver, gold and platinum sponsor tiers.

Tourism Whitsundays Chief Executive Officer, Tash Wheeler, said given the festival’s economic contribution to the region of $5 million (indirect), she hoped to see businesses far and wide tuning in to what has now become one of Queensland’s premier live music events.

“The Airlie Beach Festival of Music has achieved record growth since it started in 2013 and is renowned for turning one of the quietest weekends of the year into one of the busiest,” she said. “Visitors now flock to The Whitsundays in their thousands on that first weekend after the Melbourne Cup, for a rocking good time in the tropics that literally puts the beat into the Heart of the Great Barrier Reef.”