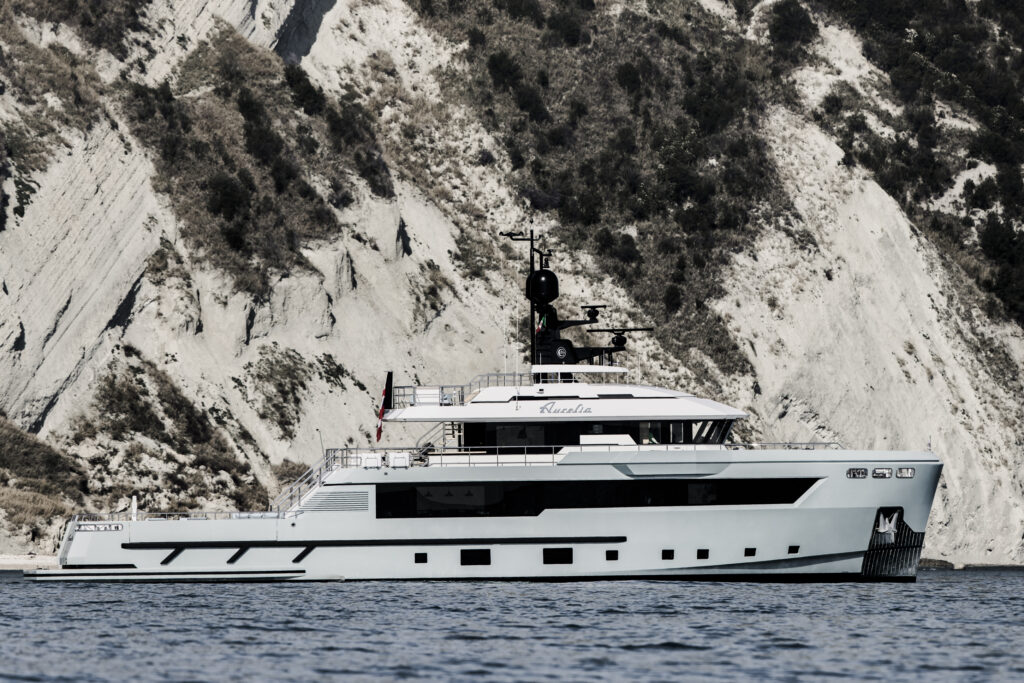 Game changer: The Flexplorer 130 is the first of it's kind from Cantiere Delle Marche 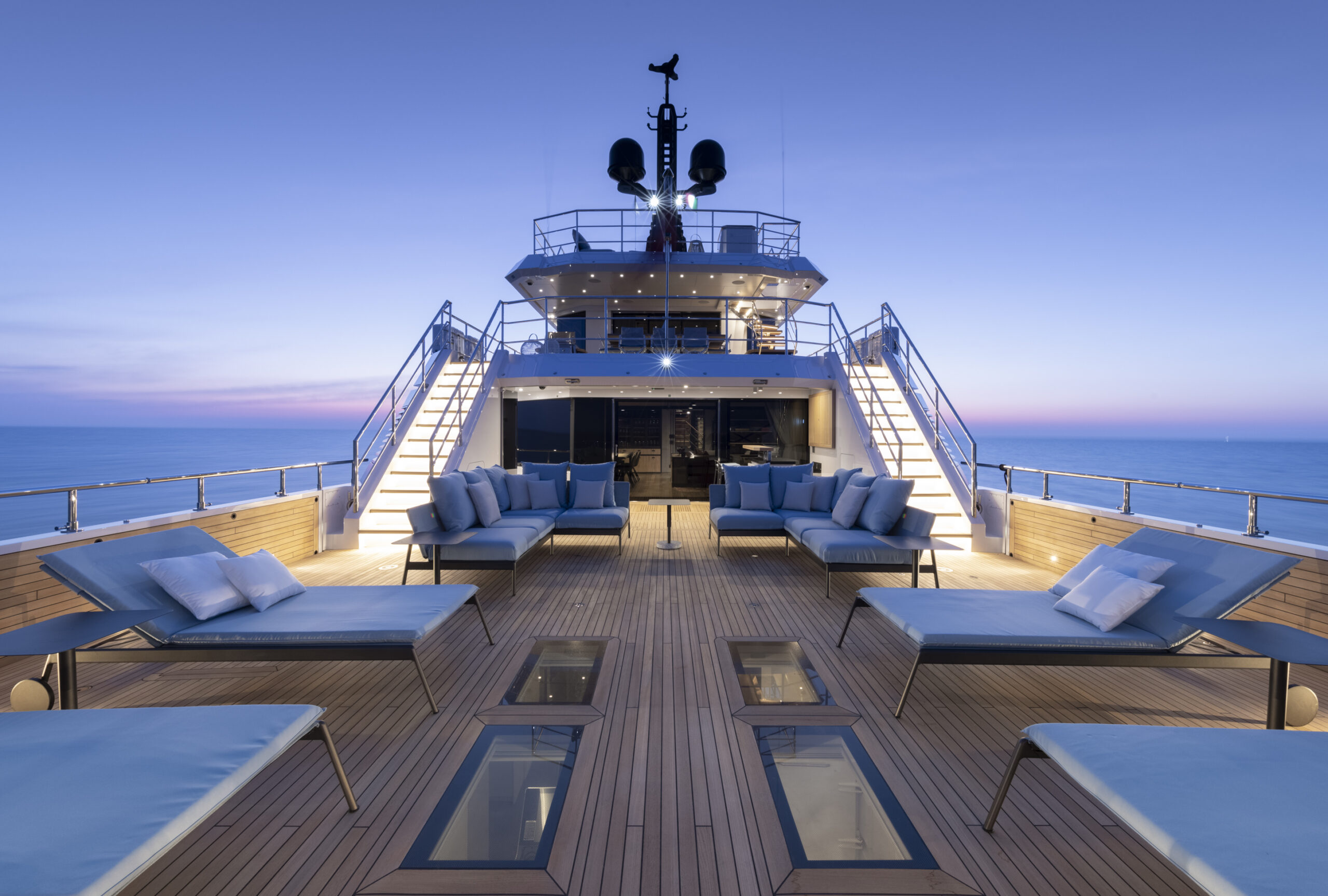 Eye-Catching Superstructure: The Flexplorer 130 is a remarkable feat of engineering 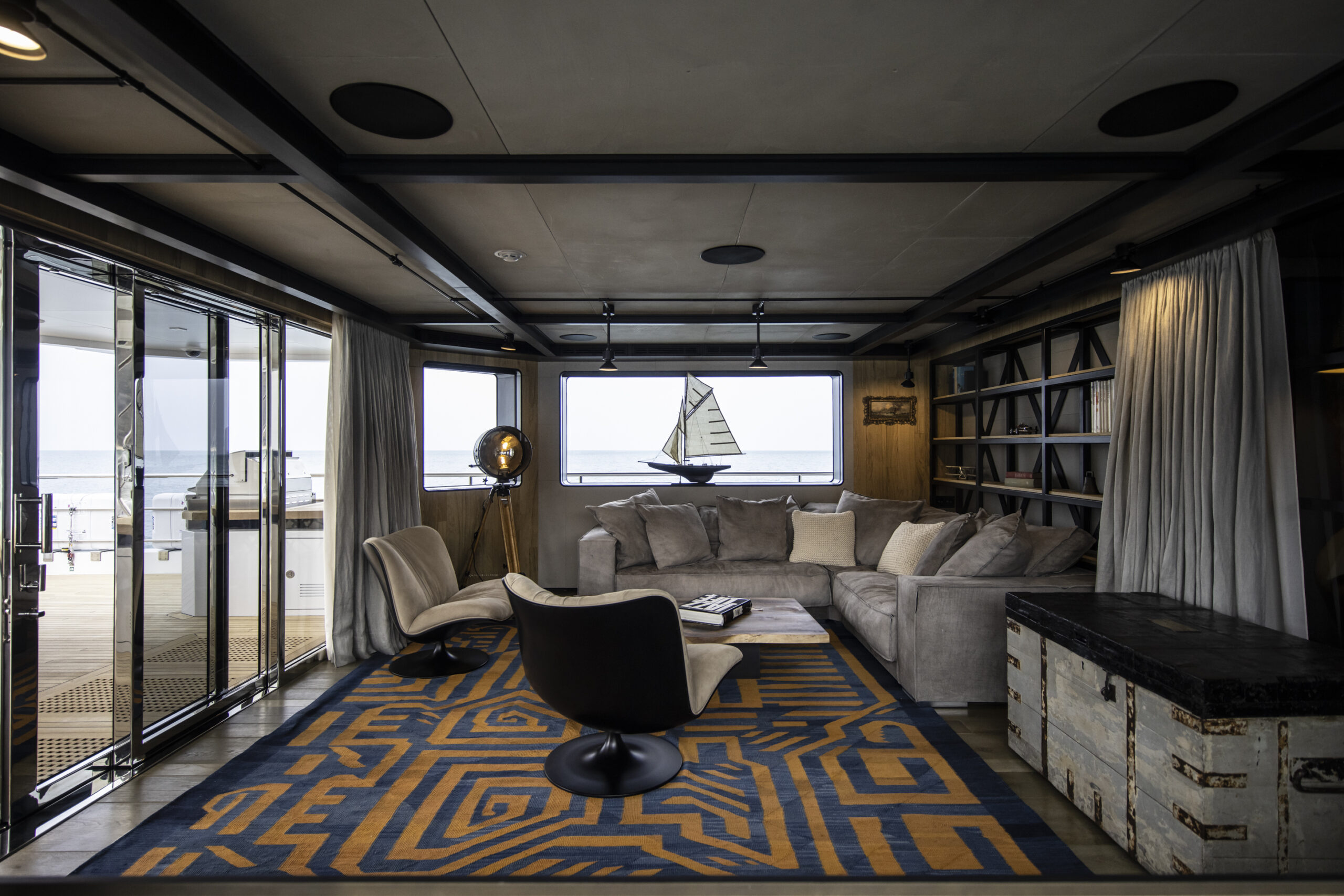 Trend setters: Competitors to CdM are already looking to design similar motor yachts of their own 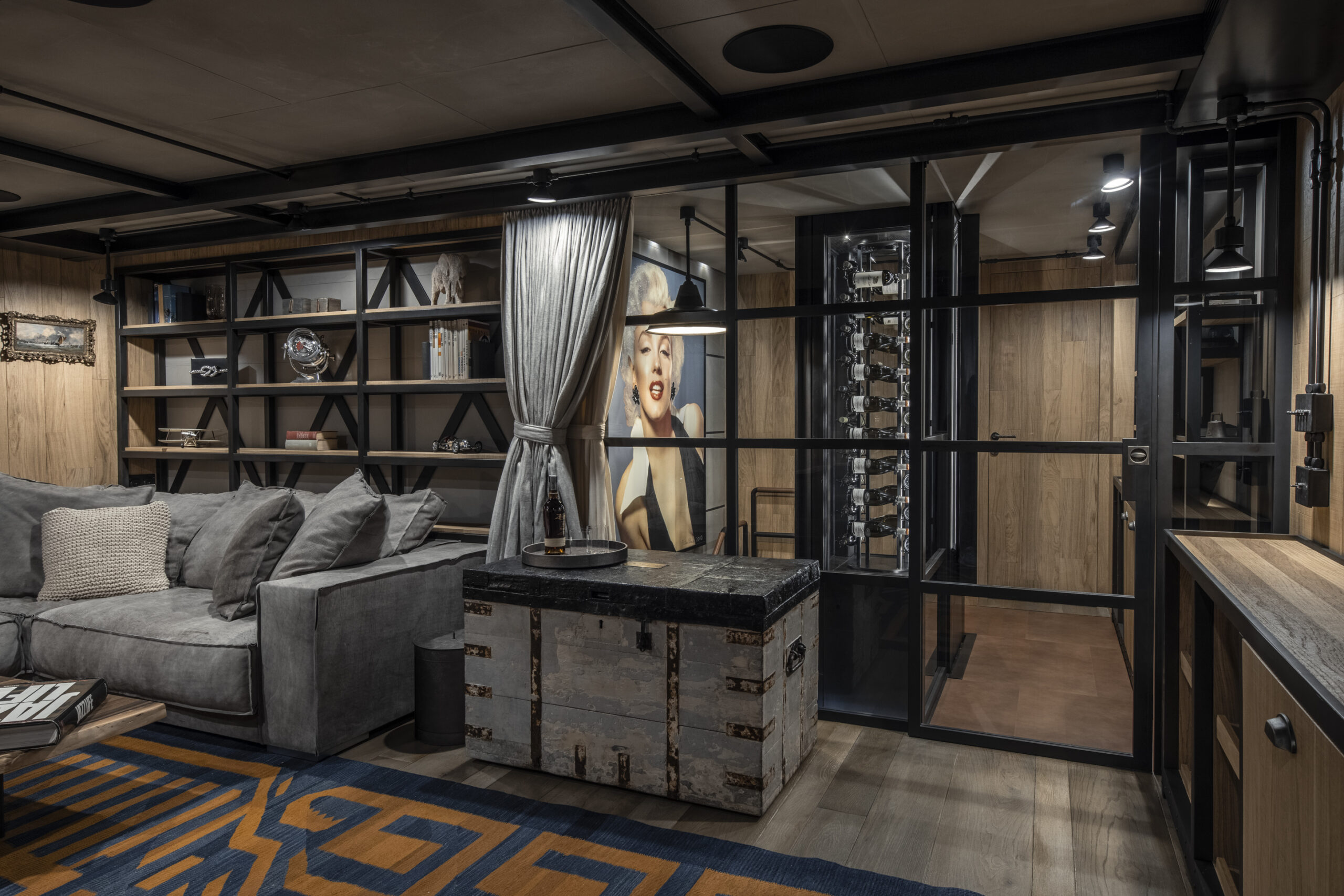 "With Cantiere Delle Marche we have totally revolutionised the concept of explorer vessels." 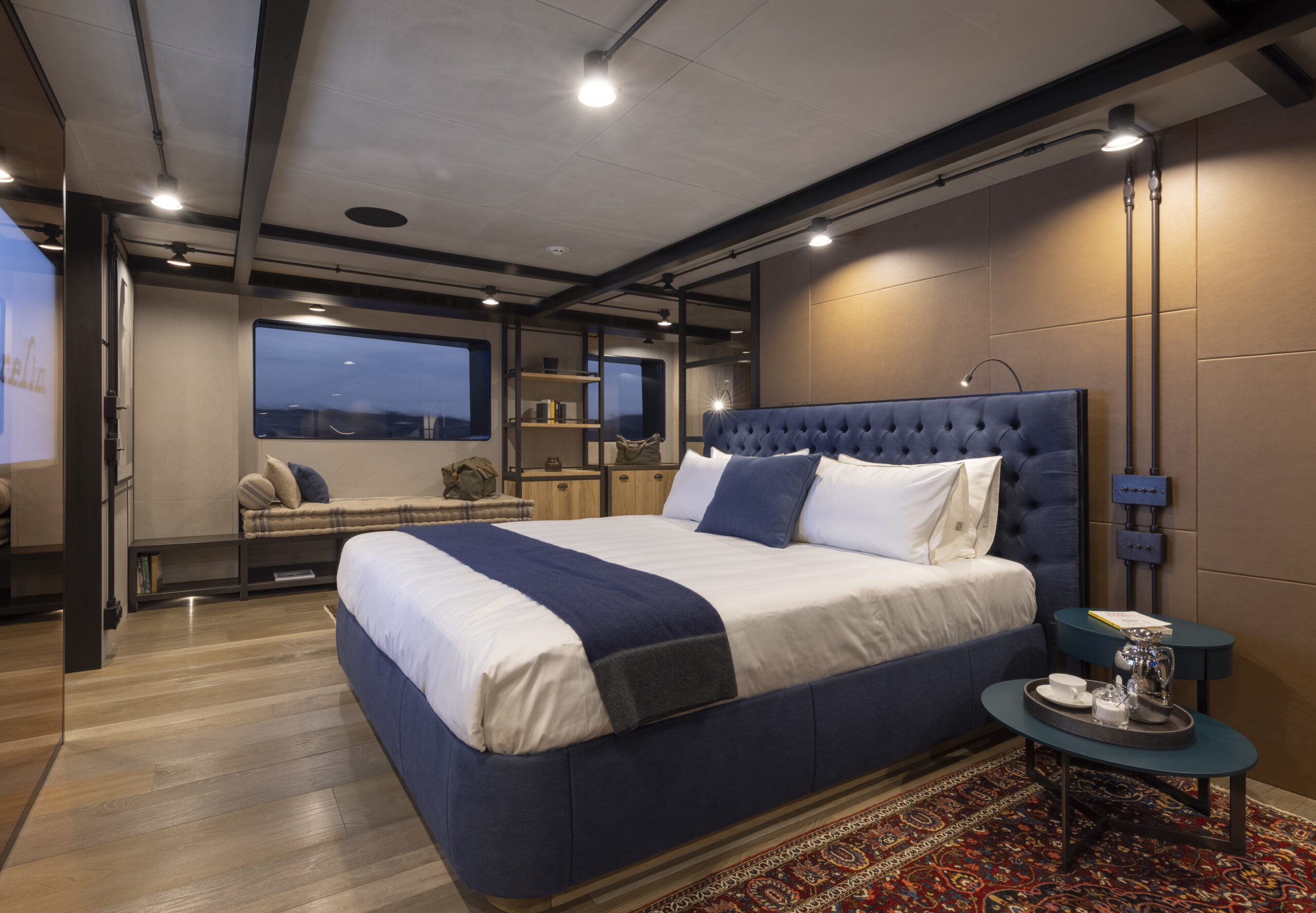 Aurelia's interior decoration is the work of the Florentine designer, Francesco Paszkowski 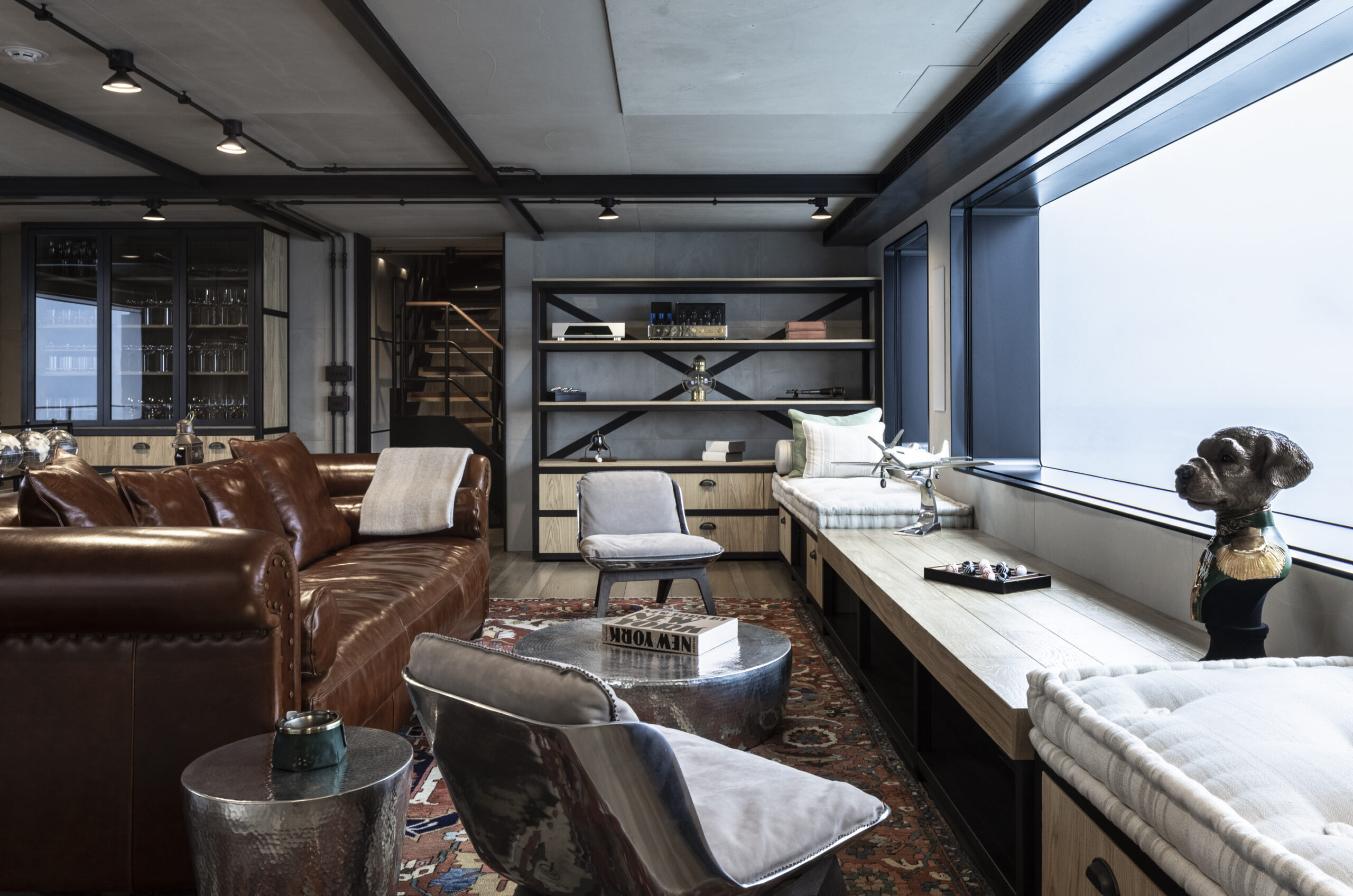 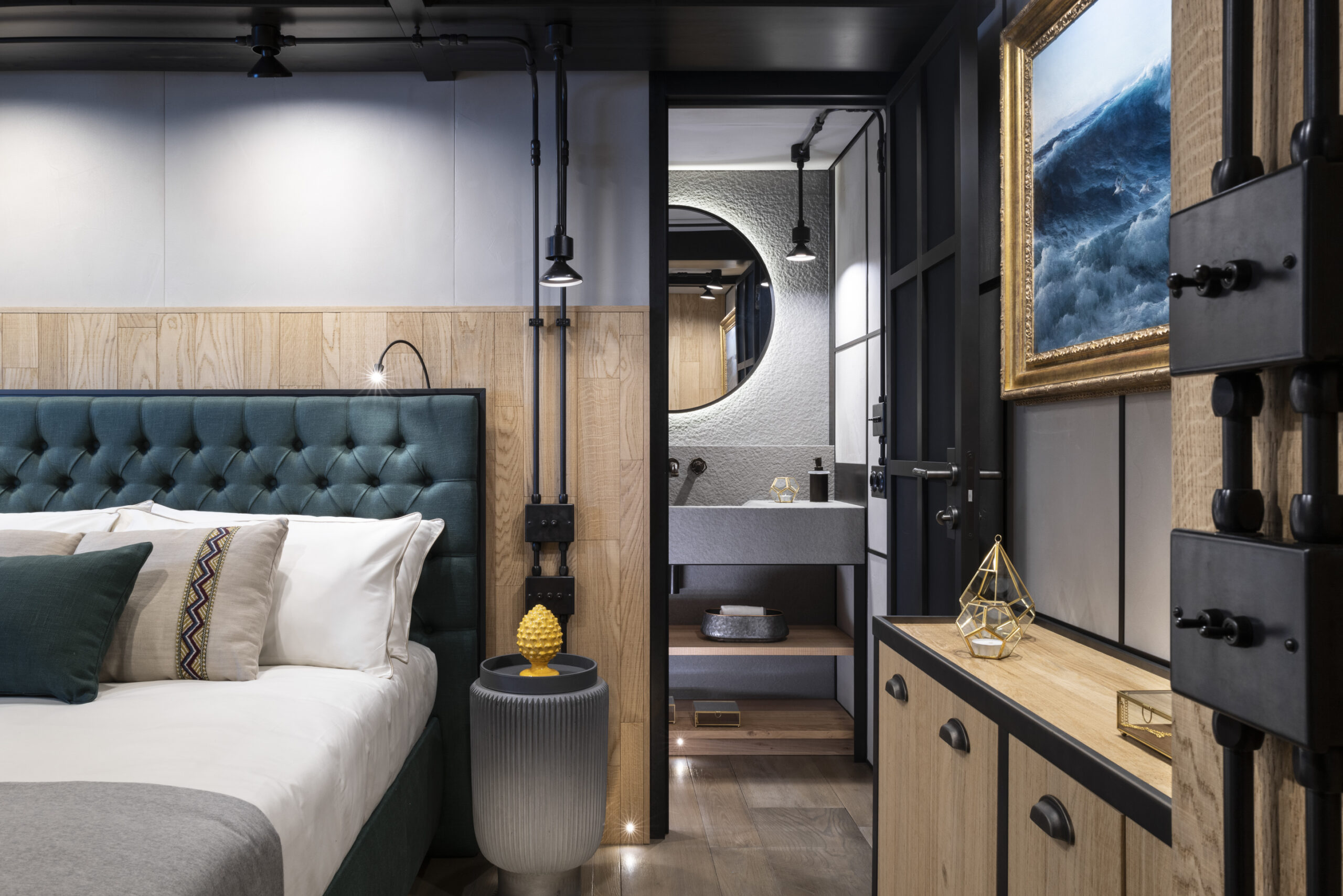 Home at sea: The interior is reminiscent of a sophisticated New York loft 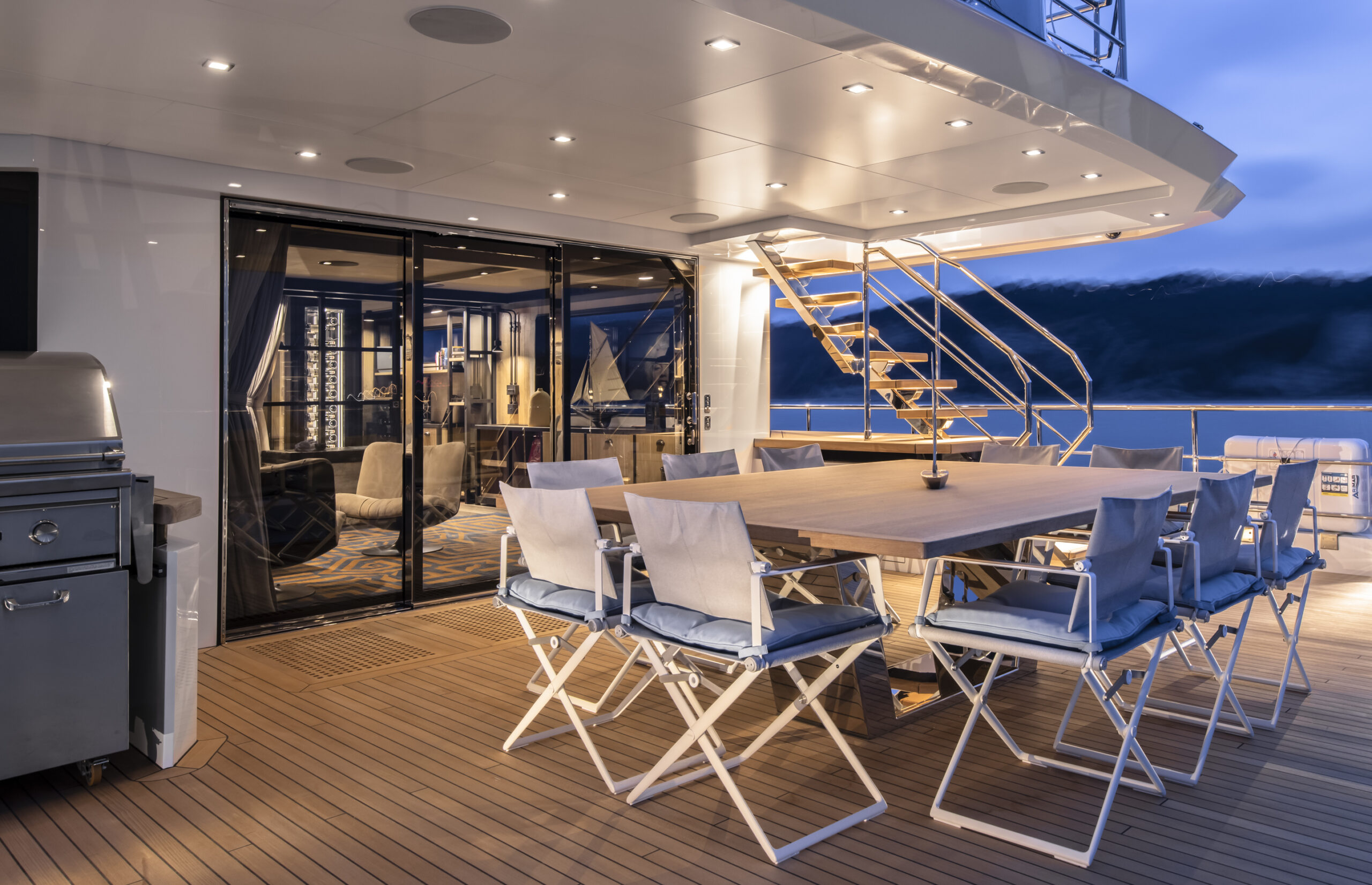 Spoilt for choice: The Flexplorer boasts a plethora of different spots for hosting and relaxing 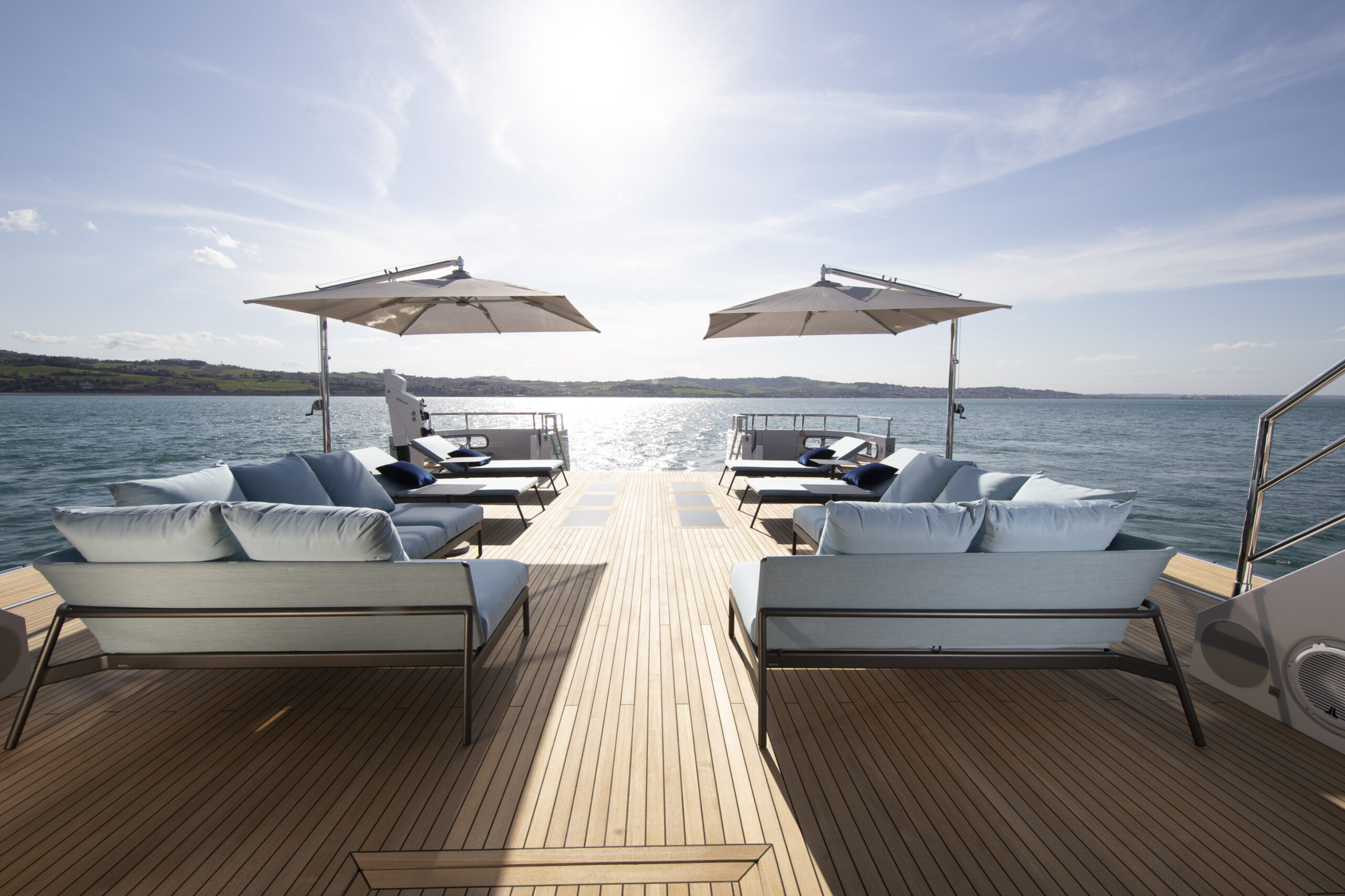 Sunsoaked: The expanse of outdoor space aboard the Flexplorer 130 is a sight to behold

“The first Flexplorer is a game changer, there is no doubt about it. It is actually already a trend-setter project if we look at many of the latest renderings published by other yards on the press after we presented the project. This makes us very proud, indeed,” says Vasco Buonpensiere, co-founder and Sales & Marketing Director at CdM. “Being the first interpreters of a new trend and being those who lead the pack, launching this kind of yacht years before our competitors… well, it is just priceless and a perfect reward for all the efforts we did to create the Flexplorer range of vessels!”

Being at the forefront of innovation and setting new benchmarks in the explorer yachts segment is in CdM’s DNA. When CdM started its activity, explorer vessels were almost unknown to most yacht owners and neglected by most shipyards. Nowadays explorer or expedition vessels represent one of the most interesting classes in the yachting market and many shipyards are beginning to notice explorer-like yachts. We can safely say that CdM certainly look to have set a trend.

Recently CdM is moving forward with one-off projects and new series among which the Flexplorer line represents a highlight as well as a turning point. The embrace of both design and technological advancements and deeply held commitment to move forward define what a CdM’s explorer vessel is today. Flexplorer is a testament to these values.

The Flexplorer line embodies all features of a pure explorer vessel: robustness, seaworthiness and comfort in all sea conditions, added to with an extra dose of flexibility and functionality. The Flexplorer encompasses CdM’s superlative levels in both construction and equipment. The first yacht in the Flexplorer line, Aurelia, is indeed a stunning piece of technology wrapped in an elegant design by Sergio Cutolo of Hydro Tec and with groundbreaking interiors by Francesco Paszkowski Design.

Her eye-catching superstructure, almost vertical bow and huge aft deck are not just styling exercises, as they provide the yacht with features that make her a perfect ocean-going vessel designed to face all sorts of weather conditions in total safety and comfort. The Flexplorer 130 has an asymmetrical layout on the Main deck. The starboard side of the salon encompasses the side passage on the starboard side, becoming larger and benefiting from open views onto the sea through large side windows. Her bold hull boasts a custom Star Green livery by Alexseal Yacht Coatings.

At 39.37m and with a beam of 8.60m, Aurelia has a displacement of 392t. Powered by twin Caterpillar C32 A Rating delivering 746kW each, she reaches a top speed of 14 knots and has a range of above 7,000nm at 10 knots. According to her Owner’s wishes, she has only four guest cabins, a large Owner apartment on the Main deck forward while two VIP suites and a twin are on the lower deck. A maximum of nine guests is pampered by a crew of six.

Among Aurelia’s genuinely unique aspects it is worth mentioning the carbon fiber, 3.5t A-frame crane that is perfectly encompassed in the deck’s flooring. This feature itself is a remarkable piece of engineering purposely developed by CdM’s in collaboration with AMS (Advanced Mechanical Solutions) to provide the yacht with a powerful crane to launch an 8.5m tender – a Jokerboat Clubman 28 EFB – without interfering with full use of deck space. It goes without saying that the A-frame crane also allows much safer loading and offloading operations and it eliminates inclining issues. The fact that the tender is loaded and offloaded in the protected water at the stern of the vessel is another plus, indeed. The second tender is a William Dieseljet 445.

Another remarkable feature are the bulwarks that are collapsible on both sides for around 7 metres to increase the deck space astern. Once the bulwarks are folded down it becomes a beach area of more than 115 square metres. There are many storage spaces on board to allow long permanence and non-stop passages to remote destinations. On the stern terrace, to port side, there is a stainless steel drainable storage space to host boards and other gear, different slots for a carbon fiber removable 500kg crane, and a very big lazzarette, these being only a few of the features which make the Flexplorer a perfect vessel for those who like to stay active when cruising.

Interestingly requested by her Owner, Aurelia has a proper gym on the Lower deck astern, with plenty of natural light thanks to six skylights. The gym is equipped with topend equipment by Technogym such as a stylish treadmill Run Personal (designed by Antonio Citterio), a Skillbike, a Cross Personal and a Kinesis Personal.

A huge wine cellar is another peculiar feature on board Aurelia. It spans two decks -Main and Upper deck – and is meant to be a remarkable design feature as it occupies the entire stairwell. It is composed by two separated wine cellars accessible from the main and upper deck. Each rack (a sort of square column) rotates on a swivel base. The racks rotate manually to give access to all bottles. They contain 44 bottles each. It has been designed by CdM in conjunction with Romagnoli Inox.

Aurelia is a displacement yacht with a bulbous bow. Her hull is deep and flared in its forward sections to keep the deck dry in all weather conditions, even the worst, while they flatten and enlarge astern to allow large diameter propellers.

The Flexplorer 130 is certainly a new direction for motor yacht, Cantiere Delle Marche seeming to pave the way here for more vessels of a similar ilk moving frowards.