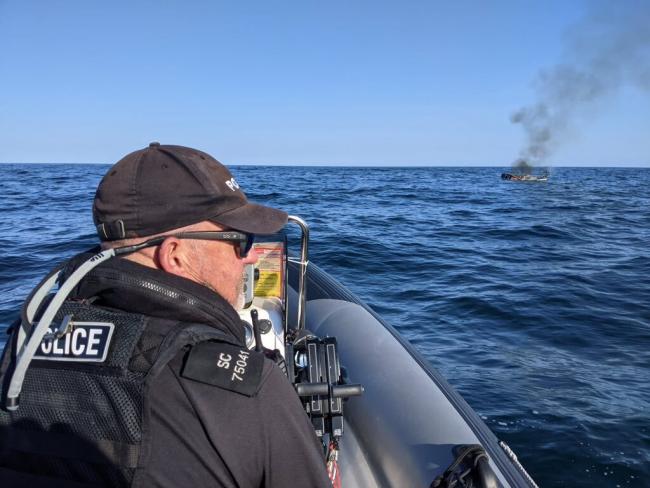 Emergency services attended the incident off the coast of Portscatho

Falmouth Lifeboat, alongside other rescue services such as the RNLI, Cornwall Fire and Rescue Service, Falmouth Community Fire Station and Devon and Cornwall Police attended the incident which came in from a Mayday.

The one man crew onboard the vessel managed to safely abandon the boat without injury and was picked up by a nearby motor yacht. Firefighters used a light portable pump to apply water to the fire.

Images captured by Special Constable Russ Hall show the boat still in flames as emergency services approach the scene of the incident.

In an update posted to his social media account, Russ said: “Last evening we responded to a Mayday. Vessel on fire off Portscatho with Falmouth RNLI, RNLI, Falmouth Community Fire Station, Cornwall Fire Rescue Service, HM Coastguard and Devon and Cornwall Police. The one crew safely abandoned to a nearby responding motor yacht without injury. Fire is a seafarers worst enemy.”

A spokesperson for Cornwall Fire and Rescue Service said: “A crew from Falmouth attended this incident in Skath An Tanlu, the service’s fire boat. The crew offered general assistance to the Coastguard. All persons were accounted for and in the hands of the attending lifeboat crew.”