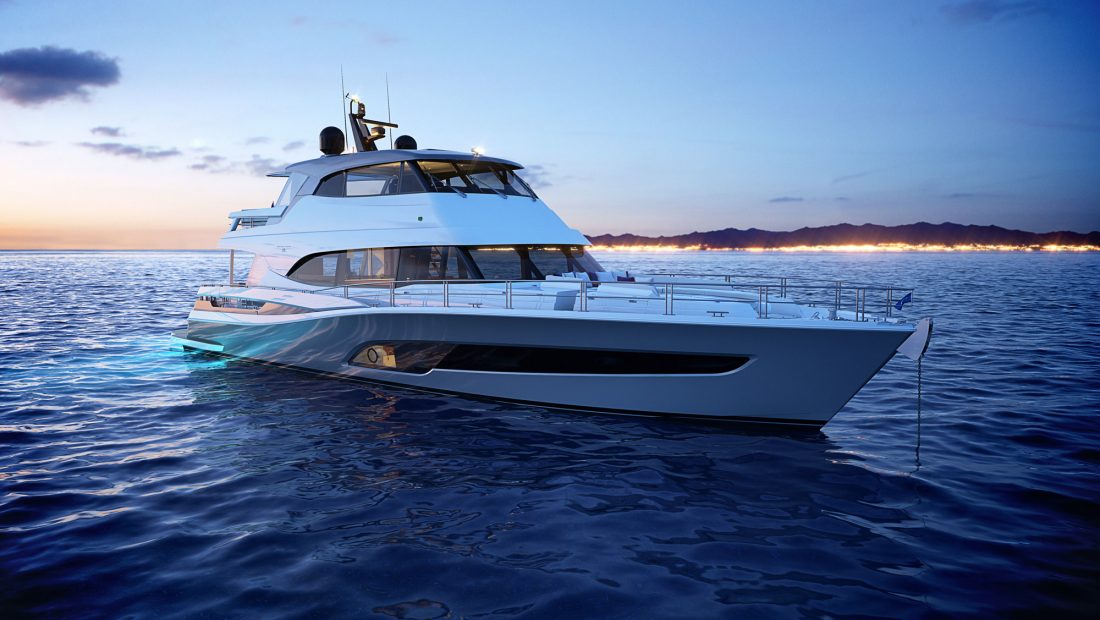 When Riviera revealed designs for a new class of motor yacht in May this year, the company’s New Product Introduction team was already hard at work building the first 78 Motor Yacht. Concepts and planning for this exceptional new motor yacht had begun in 2019 through detailed discussions with a number of highly experienced owners.

We met Riviera’s New Product Introduction (NPI) Manager Warren Maslen as the hull and deck of the first 78 Motor Yacht were being joined. Warren’s primary role at Riviera is to develop and document the build process for every model to allow the boat builders, engineers, electricians, carpenters and many other specialists to facilitate the efficient and exacting build of every yacht.

“Attention to detail is the keystone of the Riviera team, and this is certainly exemplified in the new 78 Motor Yacht,” explained Warren.

Warren joined Riviera in 2007, initially working on fitting out Riviera Sport Yachts. After spending many years on the boatbuilding production line, Warren’s skills, experience, and passion for making highest quality was recognised and he was asked to join the NPI team. Very quickly he progressed to the leadership role.

Utilising sophisticated 3D computer-aided design technology, the Riviera design team worked on concepts for the 78 Motor Yacht in collaboration with international superyacht designer Luca Vallebona. Their combined passion for excellence saw the development of plans for a sophisticated yacht that would deliver a perfect combination of family cruising, entertaining and blue-water passage-making capabilities.

The 78 Motor Yacht will be offered with an enclosed or open bridge deck and includes accommodation for up to 10 adults in four luxurious staterooms and crew quarters.

The saloon and bridge decks both extend through to the stern of the yacht, offering multiple dining, entertaining and relaxing spaces for parties, family gatherings or more quiet moments.

With the initial design completed, the new product development team took up the challenge to develop comprehensive mock-ups of the entire yacht and invited the owners who had contributed to the initial concept design to inspect the mock-up, either personally or via a video tour, and offer feedback. Overwhelmingly, the comments were extremely positive – to the extent that six owners soon placed orders.

Attention to detail is the keystone of the Riviera team, and this is certainly exemplified in the new 78 Motor Yacht.

Just one example of dedication to design is that of the helm. The layout in the mock-up included a central helm seat and companion seats on either side. A large amount of time was invested by the design team in checking the ergonomics of the helm. As with every aspect of the yacht, the designers had the benefit of many years of experience and owner and dealer representative feedback, most recently from the Sports Motor Yachts. With this new yacht the team went even further in seeking excellence.

The 78 Motor Yacht owners are enthusiastic that they will be involved in every step of their build, so each yacht will include a range of bespoke elements throughout to reflect their personal tastes and lifestyles.

With a thorough review of all feedback completed, and taking on board a range of suggestions, the design team refined the CAD modelling before computer-generated CNC routers cut plugs for every single component of what is destined to be a magnificent yacht.

Each plug was sanded in great detail before a coat of Duratech was added to ensure a perfect seal and then carefully finished to a mirror shine. The non-skid finishes along the decks were added to the plug. These stippled elements are a particular challenge for boat builders as they can cause the mould to not release completely from the plug. The Riviera team has refined the process and the moulds came away cleanly. In turn, each mould was treated and thoroughly cleaned before lamination of each component could begin.

At the same time, team members were working on the many small parts that will be utilised in this yacht, including hatches, barbecue units, wet bar units and many more. Every part is 3D CAD designed and then the plugs are CNC five-axis cut to millimetre accuracy. They are then further sanded and refined to ensure a superiority of finish throughout the yacht. Each yacht will include more than 180 small parts, many requiring multiple moulds resulting in over 300 separate moulds.

Final engineering and electrical drawings were completed to allow the team to exactly position these components.

The deck was moulded from its plug while seated on the hull plug to ensure millimetre accuracy when the final hull and deck were joined. The hull plug and deck mould were then wheeled outside of the lamination facility. The deck mould was then carefully lifted off the hull plug by three huge cranes. High in the air, the cranes worked in perfect unison to roll the mould over before it was returned to the shed for lamination.

Now the build of the first 78 Motor Yacht could begin.

Bulkheads and even the crew quarters and master en-suite were built into the hull. These elements are usually included with the deck and headliner. However, the 78 has been designed with more than a single headliner as one of the many weight-saving decisions. Adding the crew space and master en-suite directly into the hull has the added benefit of even greater structural rigidity.

Most of the electric cabling – which is kilometres in length – was installed as team members worked on the hull. Usually, most of the electrical and other cabling is installed with the headliner and many of the connections completed after the deck is joined to the hull. This new method gives the team much greater space in which to work to ensure the quality of the layout.

The MAN turbo diesel engines were test-fitted into the engine-room compartment of the hull, then lifted out while fine adjustments were made before final installation and connection to the V-drive gearboxes and oil-filled shafts.

The large structures on the yacht, including the hull and deck, are skilfully hand laid. The hull is solid fibreglass to 200mm above the chines. Above that, the hull includes a foam core. A collision bulkhead is built into the bow area. The deck includes foam core to reduce weight while maintaining strength, and the flybridge and the hardtop are infused to further save weight while adding strength.

The careful work to ensure millimetre accuracy between hull and deck resulted in a perfect fit and the yacht moved to the fitout stage when the team began to build the accommodation deck in detail.

In the meantime, the bridge is being detailed and will be fitted in coming days.

With multiple orders for this brilliant new motor yacht in place, the team has already begun work on laminating the giant hull of 78MY number two.