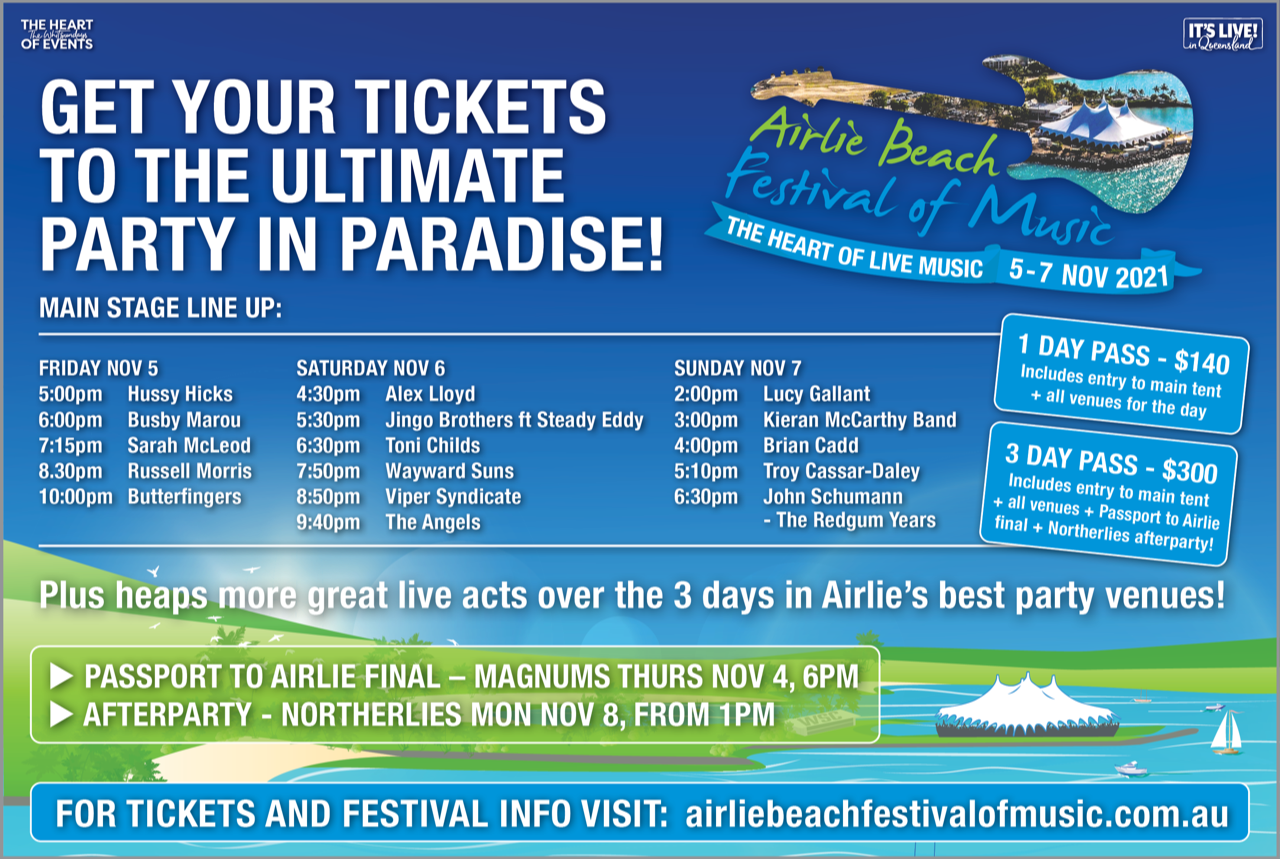 Almost against all odds, the curtain is about to rise on the ninth annual Airlie Beach Festival of Music, from November 5-7.

Festival founder, Gavin Butlin, said it was no secret pulling off a major event in 2021 had been a tough feat, but he was confident music lovers would reap the rewards.

“I’d like to thank everyone for their patience – I know there have been various changes to the schedule, but the line-up is amazing and every single artist on it is ready to give their all,” he said.

One of those artists is Australian legend John Schumann, set to bring the house down in the main tent on Sunday, November 7.

Originally scheduled to be playing with Shane Howard from Goanna, Schumann will now be performing ‘The Redgum Years’ with his band, The Vagabond Crew.

Known for his classic tracks such as I Was Only 19 and Poor Ned, Schumann described The Redgum Years as: “a concert of songs that define Redgum – songs that the band made famous and that were great hits”.

“This is a set for all the people who have a sense of humour, know what it means to be Australian and have a passion for making this the best country it can be,” he said.

Being able to perform that set at a festival on the waterfront in the Heart of the Great Barrier Reef, is a privilege not lost on Schumann or his band.

“It’s been a really tough time for the whole music industry, but the Airlie Beach Festival of Music team has persevered beyond anybody’s wildest dreams,” he said. “This is now an opportunity for us all to get together and demonstrate to the various governments how important live music is to Australian culture; this is when we hold our heads high and our shoulders back – Covid will not defeat us.”

A platinum album seller, ARIA Hall of Famer, multi-award-winning songwriter and recipient of an Order of Australia (AM), Cadd is a powerhouse singer and piano player whose talent spans decades, from the 1960’s, to today.

Promising fans all the hits from his 55-year career, “including ones I wrote for other artists, plus a few songs from my Nashville Americana album ‘Silver City’,” in Cadd’s opinion, there is “so much to look forward to” at the Airlie Beach Festival of Music.

“It is in one of the most beautiful parts of Australia, it is always a wonderfully organised event with amazing audiences, and the line-up is an exciting combination of iconic Australian headline acts,” he said.

“It’s not often a festival gets all the elements right – location, line-up and great vibe – do not miss it!”

With other headline acts including The Angels, Troy Cassar-Daley, Butterfingers, Russell Morris, Sarah McLeod and Busby Marou, Tourism Whitsundays Chief Executive Officer, Rick Hamilton, agreed this was a festival not to be missed.

“If you haven’t got your tickets yet there’s still time but don’t delay. If there’s one festival you absolutely have to experience it’s the Airlie Beach Festival of Music in The Whitsundays, the Heart of the Great Barrier Reef,” Mr Hamilton said.

The festival kicks off with a soft opening ‘Beach Jam Session’ on the Airlie Beach foreshore at 5pm on Thursday, November 4.

This is followed by the grand finals of the national Passport to Airlie competition, hosted by Magnums Hotel on the Airlie Beach main street, from 6pm.

Here, bands who won their regional heats in Darwin, Cairns, Brisbane and Mackay, will battle it out for the Australian title, judged by a panel including Superjesus frontwoman, Sarah McLeod.

Emerging young talent plays the Fishjam Stage at the Airlie Beach market area on Saturday and Sunday from 10am-2pm.

Set under a big top tent on the idyllic waterfront of the Whitsunday Sailing Club, the main stage program runs from 5pm Friday, to John Schumann’s closing set at 6.30pm Sunday.

The festival formally finishes with an official after-party, hosted by Northerlies Beach Bar and Grill from 1pm Monday, November 8, and headlined by Sarah McLeod.

Three-day passes cost $300 and provide access to all days and events.

Single day tickets are available for $140.