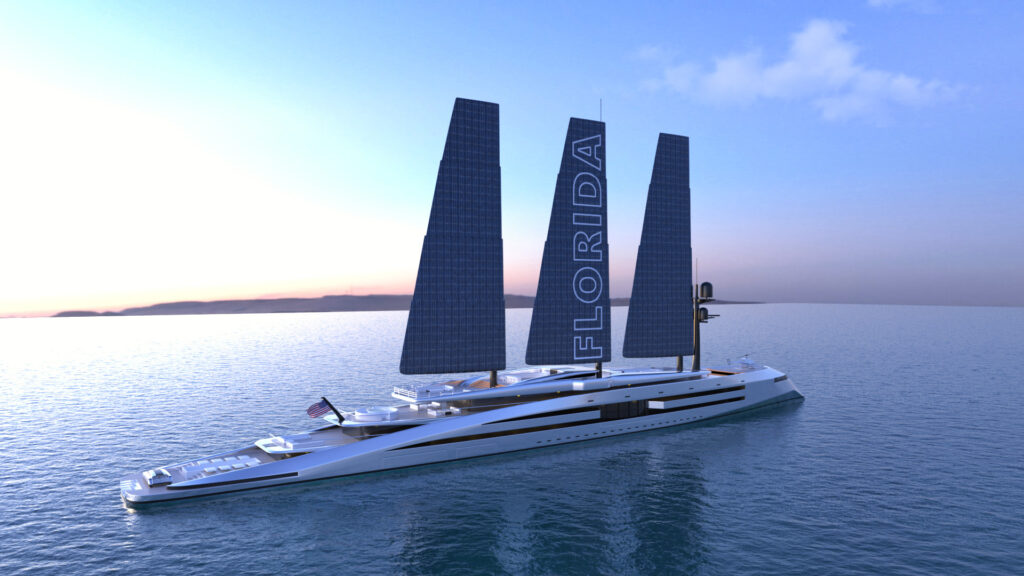 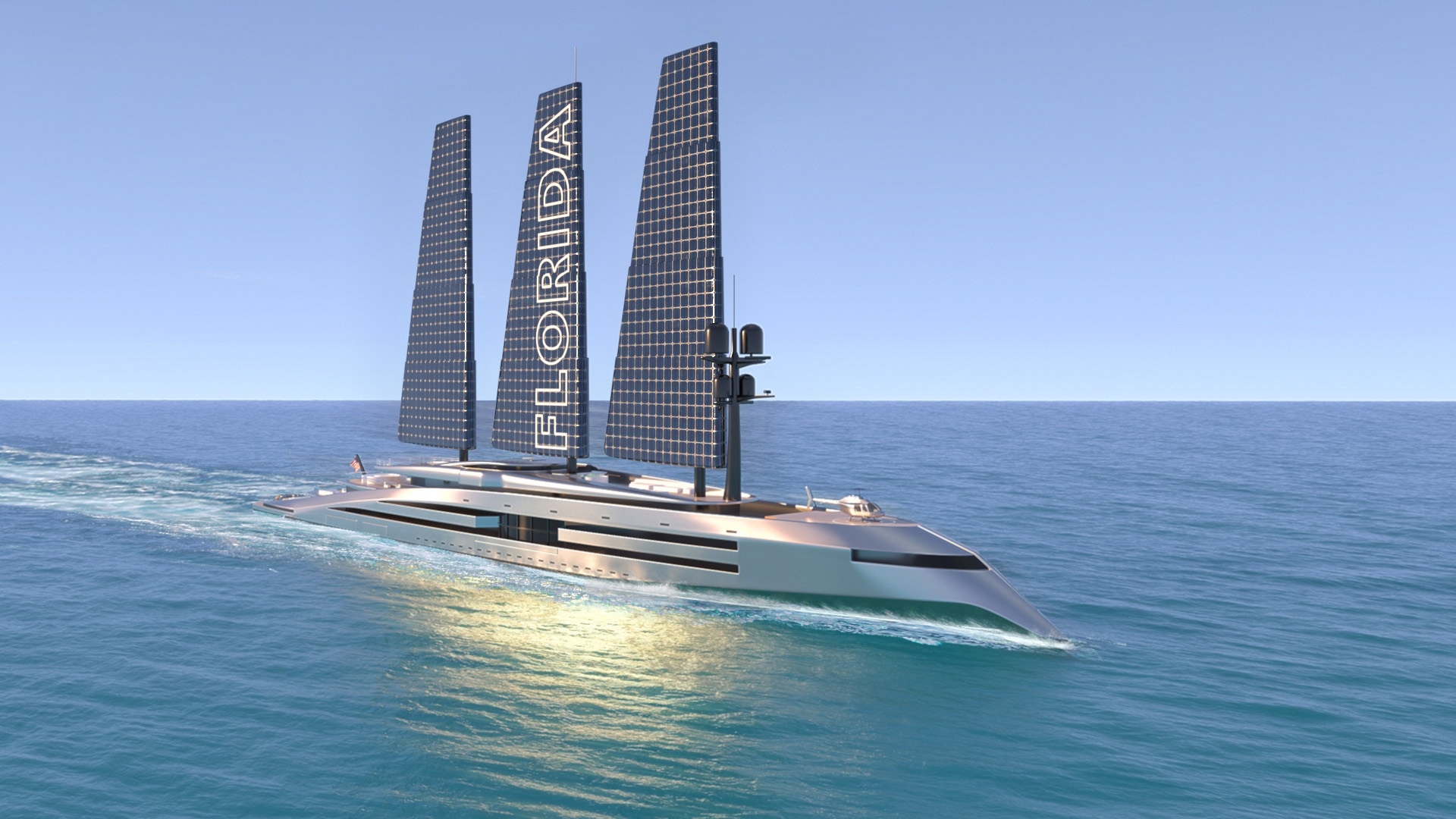 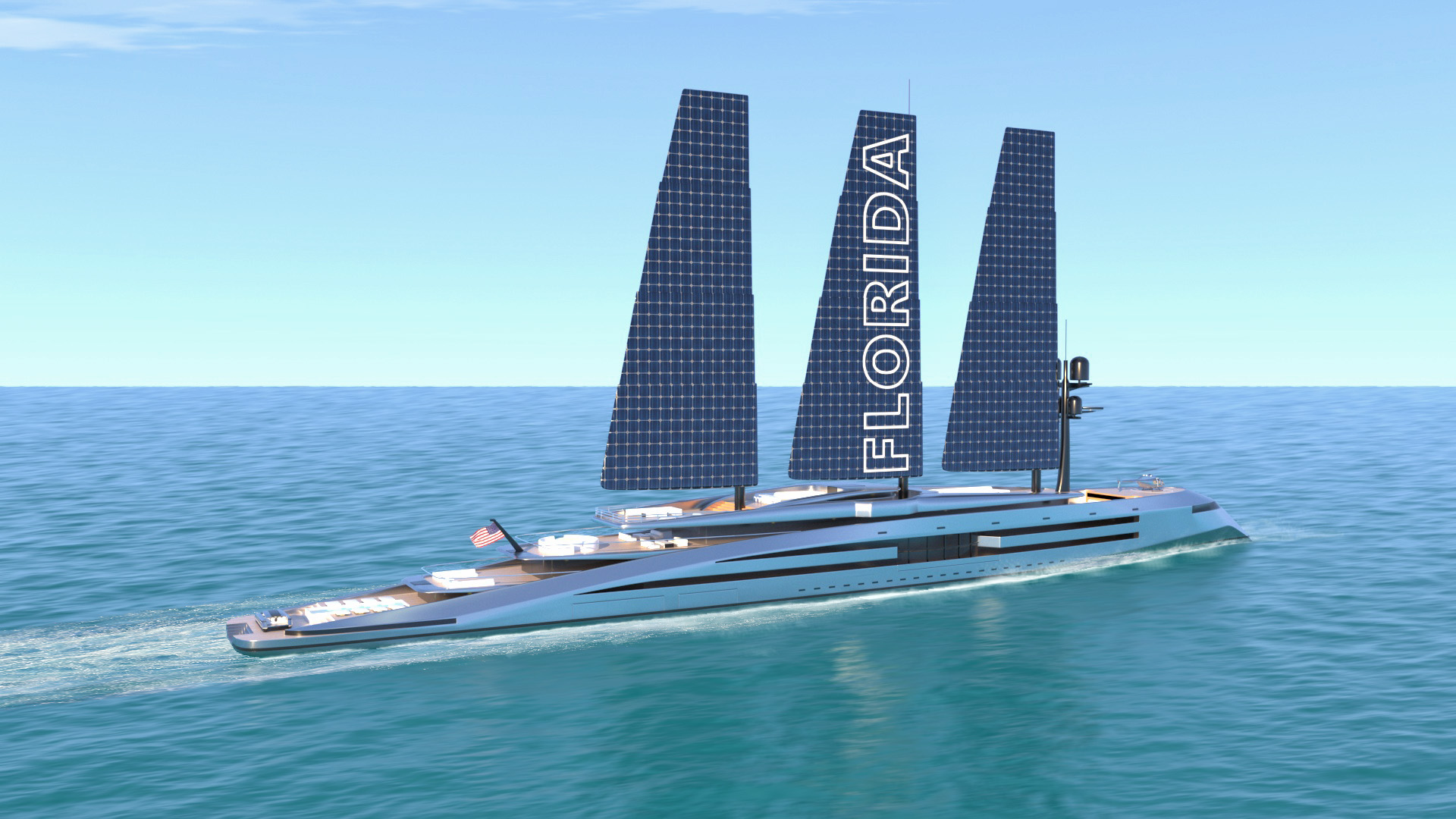 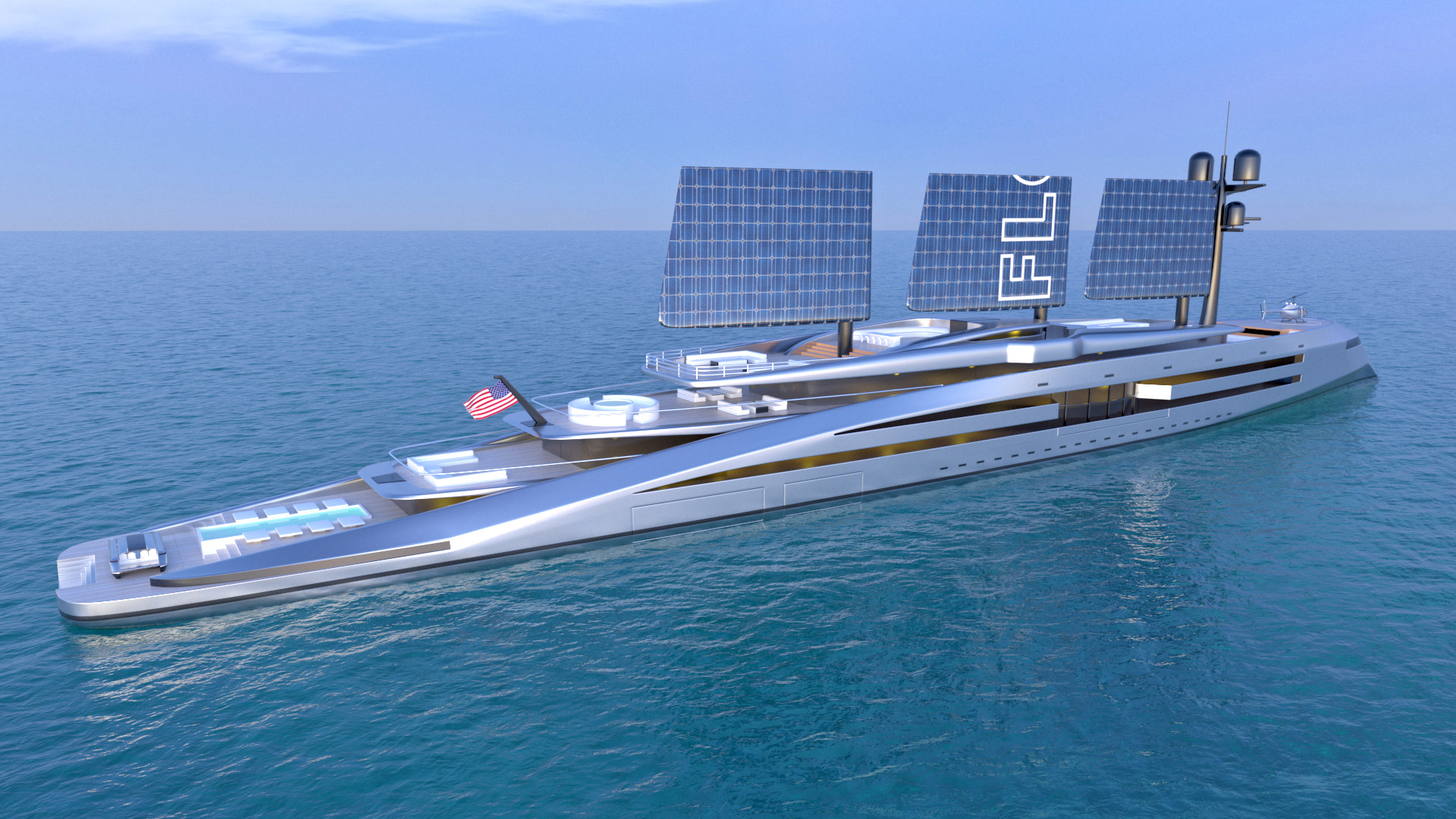 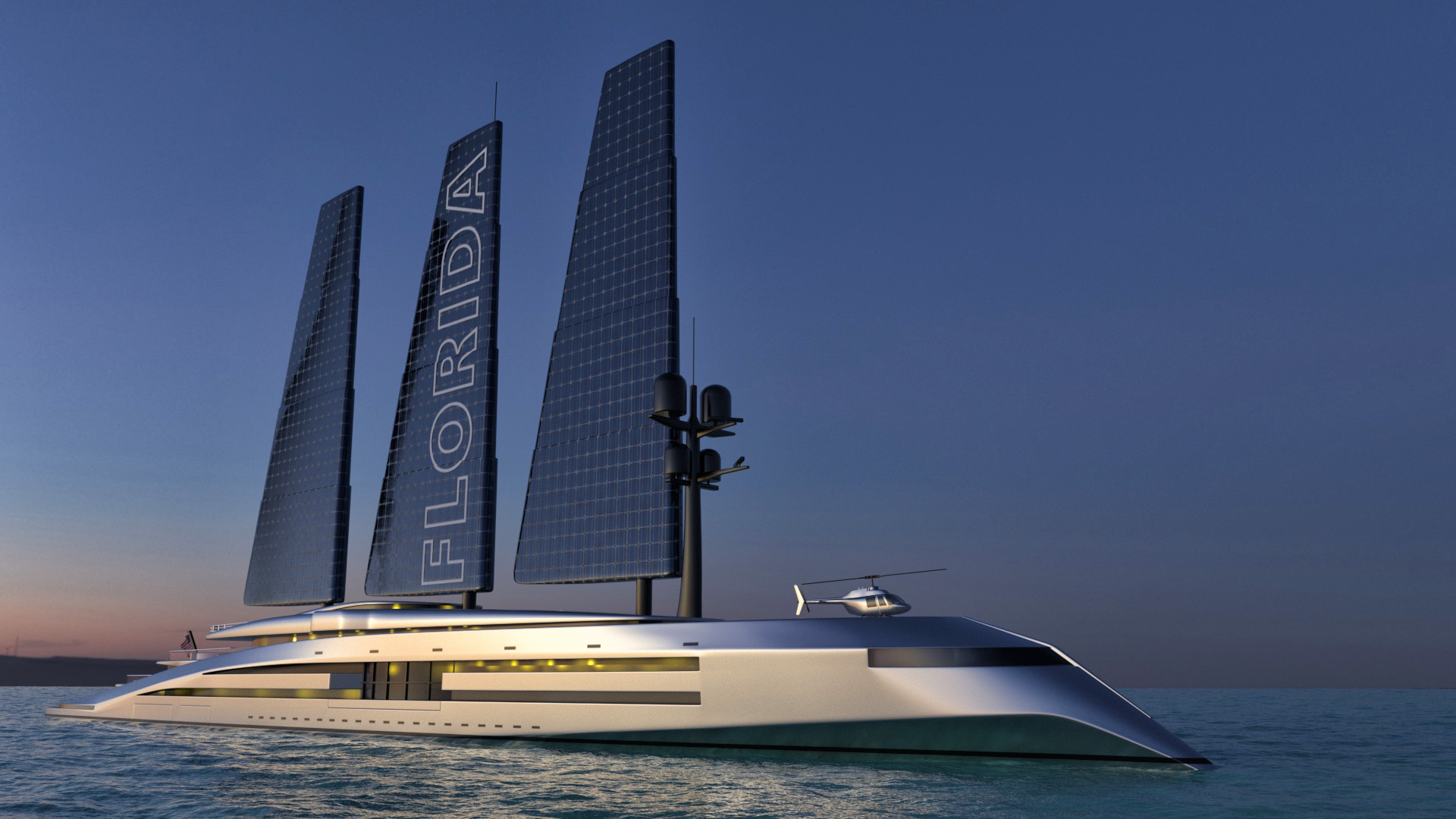 Florida boasts a number of high end features including a helipad 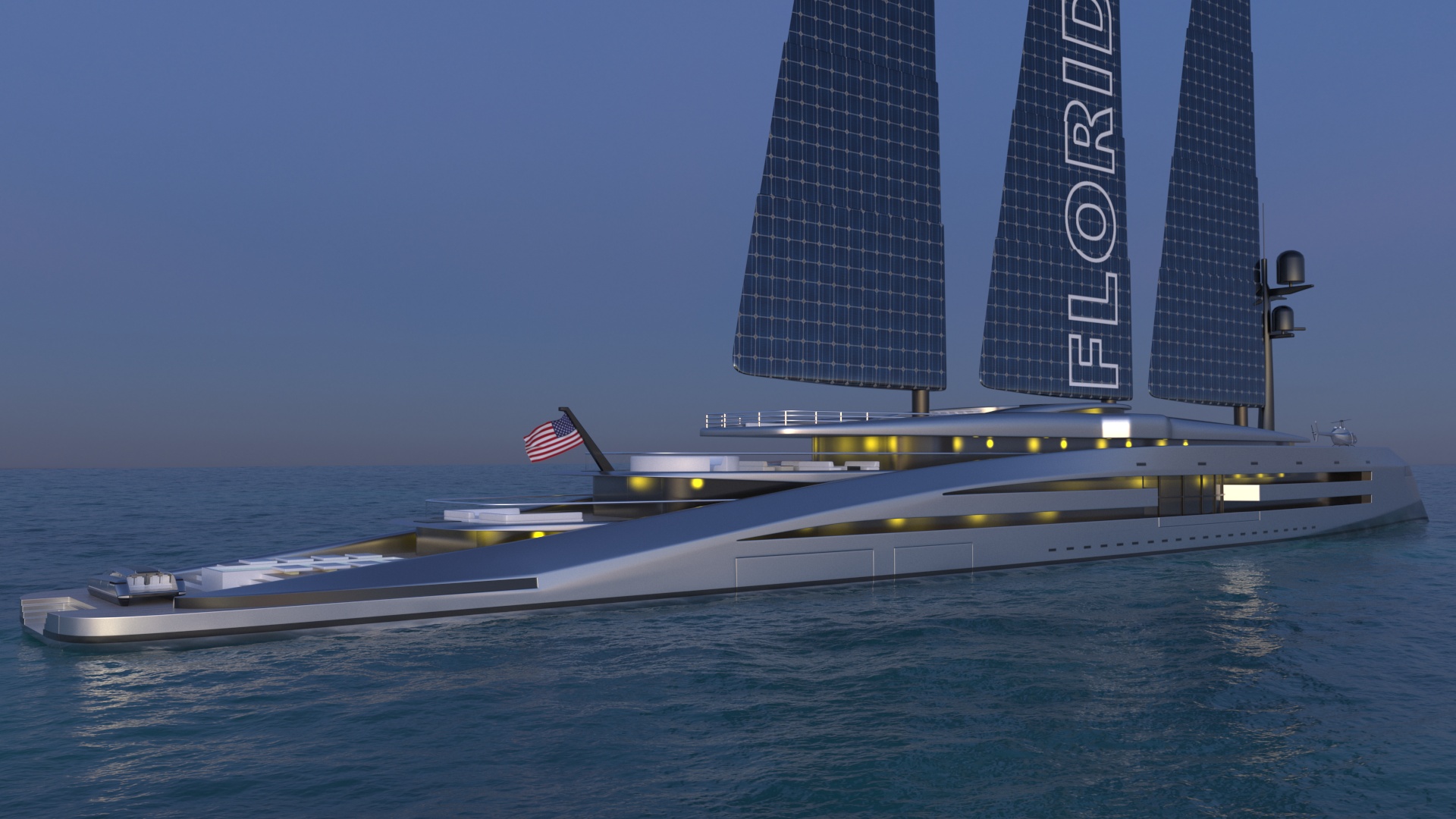 Florida based Norwegian designer Kurt Strand has revealed his latest Superyacht concept, the 160 meter superyacht “Florida” and this dreamboat if certainly a sight to behold.

When we are talking about yacht sails, many would probably think about white sails made from sail cloth. This Yacht however is different. It is equipped with space age technology wing masts made from carbon fibre and three 80 meter tall wing sails which are electro-hydraulic, telescopic and retractable. If that alone isn’t beyond spectacular, the wing sails are covered with the latest state of the art solar panels.

In the case of no wind, Strand has also thought of a viable solution, with this superyacht able to move into its solar sail mode. The control system onboard will automatically adjust the sails to an optimal angle for sun rays, and when it is windy, the yacht can be put into sail mode and produce electric power from the solar panels at the same time. In order to keep the sun absorbing surface high and glossy, a built-in system will wash and polish the wing mast every time they retract. The intelligent solar sails can even be raised when the yacht is harboured, turning the sails automatically away if wind is detected.

Every energy avenue has been explored here onboard “Florida”, with power created resultantly stored in the battery bank and used for onboard Hydrogen production. The bottom of the vessel is fitted with hydro generators which also produce electric power whilst the yacht is moving under sail. All electric power produced will be stored in a 5MW battery bank and can also be used for Hydrogen production onboard the yacht itself. This means that in case of no wind or sunshine, the yacht can instead be run by its hydrogen powered fuel cells.

The yacht will also be equipped with a genset backup system running on fossil fuels. However Strand suggests that fossil fuels would rarely be used onboard, depending on where in the world the yacht is situated. Compared to a traditional yacht in the same size, the fuel reduction is about 90%, but under ideal weather conditions this yacht will produce more power than it will be using.

This groundbreaking vessel has been engineered with two, side by side retractable keels equipped with stabiliser. The keels can be lifted individually, not only to balance the yacht but also allowing it to lean in order to achieve the optimal angle for the sun rays to reflect off of the solar panels. The retractable keels also allow the yacht to enter shallow waterways close to the coastline.

In a harbour with low wind, the wing sails can be raised to produce power for Hydrogen production. They can even be connected to the land electric system to share power.

Superyacht “Florida” provides the ultimate luxury water travel experience and will accommodate up to 24 guests in 12 luxury suites and can host up to 40 crew. Kurt Strand’s creation boasts a number of high end features, including a helipad at the fore deck with an elevator to the hangar below deck, and a large swimming pool at the aft deck. “Florida” is also home to a beach club with a huge selection of tender boats, off-road vehicles, jet skis and water toys. One of these tender vessels is the 40 foot electric powered Beach Cruiser, an amphibious & submersible limousine tender. This extravagant tender is stored at the retractable aft deck and can be easy launched and landed on the deck. It also features a track system meaning the tender can drive up onto a beach and even drive on the ocean floor in its futuristic sub mode.

In the centre of the yacht is the circular two storey high lobby with stunning, undisturbed views from both sides of the yacht. The interior of this luxurious vessel has been designed in coastal Florida Keys style. All interior floors and carpentry are made from reclaimed wood, the colour palette is in Miami pastel tones and the vegan leather and exterior launch furniture is all made from recycled plastics. The “Florida” also include its own fitness centre, spa, onboard car garage and cinema.

This futuristic design from Kurt Strand does pose some interesting concepts when looking towards a greener future, with the solar sails not only imaginative but visually imposing and highly effective.