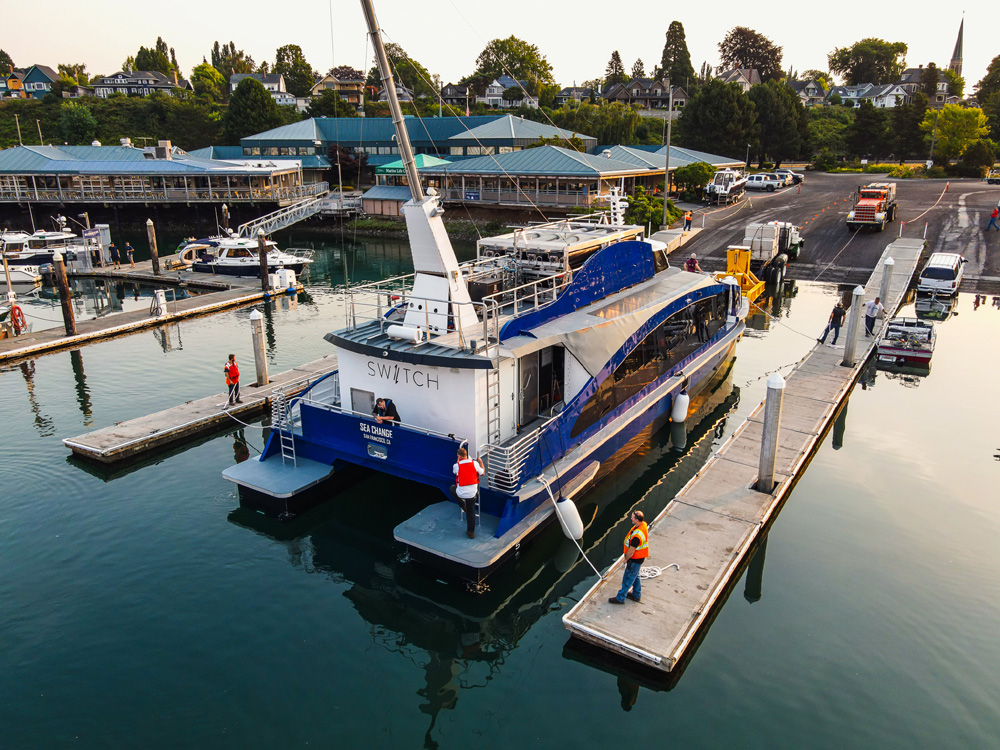 The launch has been completed and trails are beginning on the first hydrogen fuel cell vessel built and operated in the US. The 70-foot Sea Change is a 75-passenger hydrogen fuel cell-powered, electric-drive ferry that will operate on California’s San Francisco Bay. Drawing from an Incat Crowther design, the vessel was built by All American Marine as a prototype that can also be used to develop hydrogen vessels in the United States.

The ferry was constructed to demonstrate a pathway to commercialisation for zero-emission hydrogen fuel cell marine technologies. While still working on permitting for hydrogen fuel systems for maritime vessels with the US Coast Guard, the completed ferry will exhibit the viability of this zero-carbon ship propulsion technology for the commercial and regulatory communities. The construction supervision and management were led by the Hornblower Group while the vessel will be owned by SWITCH Maritime, which is a private investment platform building a fleet of zero-carbon maritime vessels to accelerate the decarbonisation and energy transition of the US maritime sector.

“By working closely with the US Coast Guard, with innovative technology partners, and with best-in-class shipyards such as All American Marine, we can make the transition to decarbonised shipping a reality today,” said Pace Ralli, Co-Founder and CEO of SWITCH. The company seeks to work with existing ferry owners and operators around the country to help facilitate their adoption of zero-carbon vessels.

The vessel is equipped with a hydrogen fuel cell power package provided by Zero Emissions Industries, comprised of 360 kW of Cummins fuel cells and Hexagon hydrogen storage tanks with a capacity of 246kg. This system is integrated with 100kWh of lithium-ion battery provided by XALT and a 2x 300kW electric propulsion system provided by BAE Systems.

According to the companies, the hydrogen fuel cell powertrain system will afford the same operational flexibility as diesel with zero emissions and less maintenance. Built of marine-grade aluminium, the Incat catamaran is designed for a top speed of 22 knots.

The project received municipal support including a $3 million grant from the California Air Resources Board (CARB), administered by the Bay Area Air Quality Management District (BAAQMD). Additionally, the project received the first-ever loan guarantee under BAAQMD’s Climate Tech Finance program, which developed a $5 million construction and term loan that financed the construction.

Operational trials of Sea Change are currently underway. It is anticipated that it will go into service on the San Francisco Bay in the third quarter of 2021.