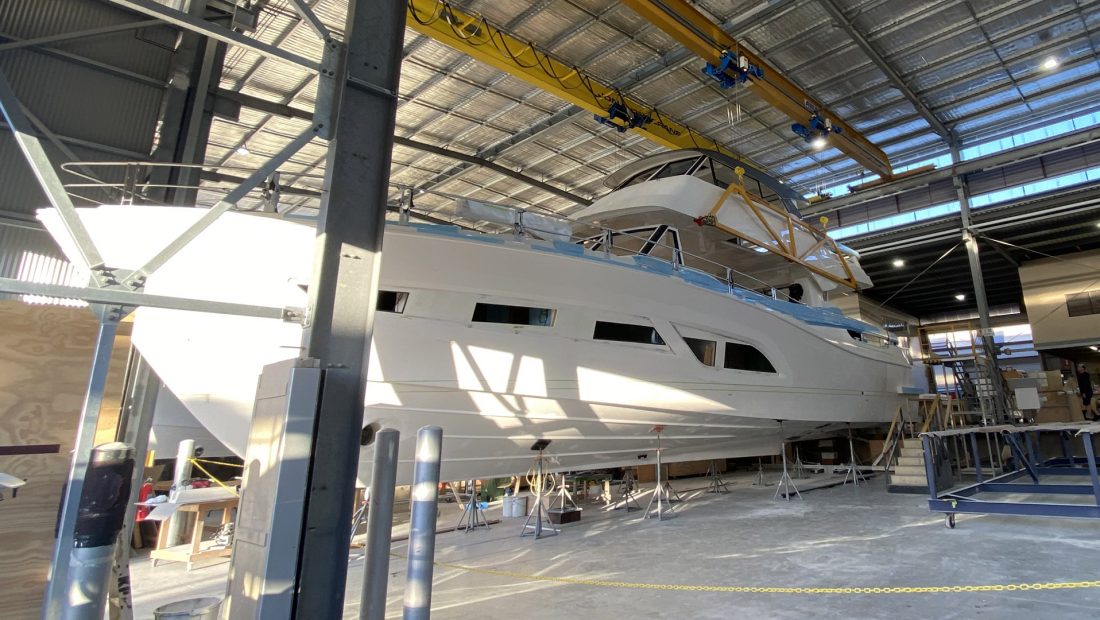 During our previous visit to the developing Riviera 78 Motor Yacht, the team had completed the process of joining the hull and deck of this exceptional new yacht.

Now she has truly come together to provide all who see her with a comprehensive impression of the yacht that will make her world premiere early next year.

With much of the engineering work complete, the next step was to bring the superstructure together to create the enormous bridge deck that extends over the saloon deck almost to the transom.

The bridge deck was assembled separately from the main body of the yacht with the frame that separates the interior from the aft deck area installed, the windscreen lowered into place and the steel frames for the electric side windows also positioned.

The hardtop, with its electronic wiring ready for TV and radar domes and the giant electric sunroof, was completed and precisely lowered onto the bridge deck superstructure.

The entire assembly was then lifted over the yacht and carefully lowered into place. The millimetre accuracy of computer-aided design and moulding ensured that the major components of this yacht – the deck onto the hull, the bridge deck superstructure onto the main deck and the hardtop above it – all have a precision fit.

Then came the first dramatic moment for the 78 Motor Yacht as she was lifted onto Riviera’s remote-controlled TM100 transporter and brought out into the bright sunshine of an early spring day. She was delivered to the Riviera travel-lift bay at the marina and carefully lowered into the water for the first time.

Riviera’s New Product Introduction (NPI) Manager Warren Maslen explains that this process is to ensure that her waterline is as predicted by the computer modelling.

“She is beautifully balanced and floats as we designed,” he says. “She will settle slightly lower in the water after we have completed the fitout of the yacht. While this first test is always a little demanding for the team, it is comprehensive proof of our design systems and approach.”

The yacht was then returned to the substantial fit-out facility where the skilled craftspeople continued the exacting task of completing the detailed work.

During an inspection of the timber shop, Warren explained that a robotic spray machine had been utilised to coat the many highly varnished timber panels that were already in racks ready to move across to the fitout facility when required. The robotic machine ensures an even coat across every panel.

He also displayed a set of the many hundreds of small timber parts, each with computer-generated drill holes.

“We know from this that every screw required will be in exactly the right place,” he says.

“There are some 5000 individual parts aboard this yacht,” says Warren. “Our build manual shows me where each one is to be positioned.”

Back on board the yacht, the teak decks of both the saloon and bridge decks have already been laid. The galley space in the middle of the saloon deck is marked out.

This first 78 Motor Yacht includes an optional head on the bridge deck and is already in place.

In coming weeks, the saloon and bridge deck cabinetry will be assembled and brought on board and the fitout of the four staterooms and four bathrooms will begin.

Our next visit to the Riviera 78 Motor Yacht will see her going through an extensive quality control process and final preparation ahead of her launch.