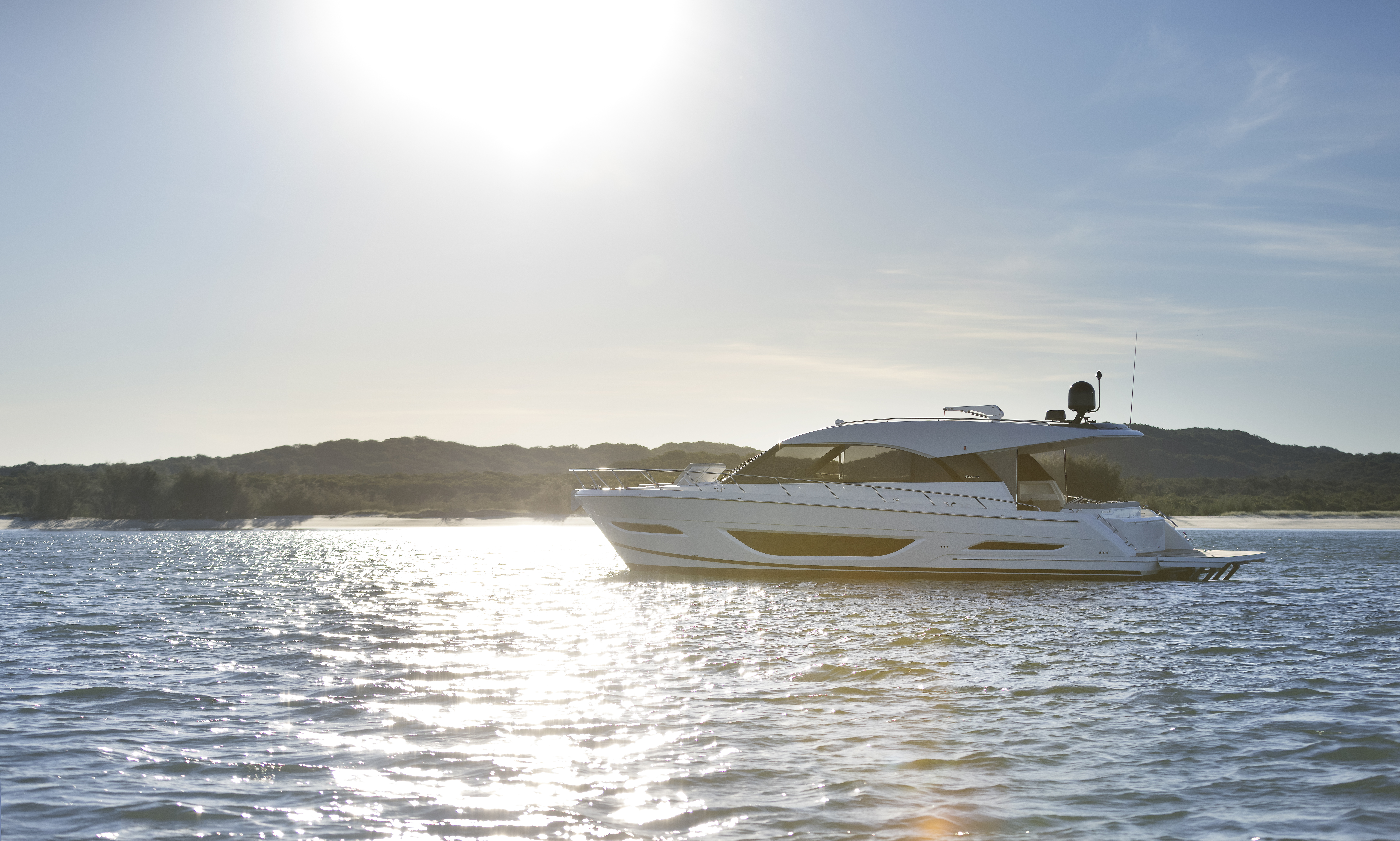 After the reveal of the all new S55 from leading Australian luxury motor yacht builder Maritimo, at Sanctuary Cove International Boat Show back in May, here at motoryacht.com.au we have been awaiting the model’s official launch with bated breath.

Having already set a record for the S Series Range, the S55 has been highly anticipated by many in and around the industry. In the build-up to this launch, we had the opportunity to have an in-depth discussion with Tom-Barry Cotter, Lead Designer at Maritimo, to dive deeper into the design process behind the S55.

From where did you draw inspiration when starting the design process for the S55?

One advantage with the S Series is that we already have that base of owners. We worked very closely with the owners throughout the design and development of the latest addition to the series.

Aside from this though, we’ve taken a lot of learnings from the X Series, particularly in terms of form, function and layout. You can see just by looking at the S55 that the biggest advancement, and probably the biggest difference between itself and its predecessors is in its exterior form. We’ve had an excellent response from our S Series owners regarding the changes to boat’s exterior. They love the new lines, and we feel this is a design which is going to take us forwards very well.

Did you take inspiration from the M55 after the success it achieved industry wide earlier this year?

Well, the M55 is certainly a close relative of the S55, and obviously that was a record-breaking launch for us, not only for the success of the M Series but for Maritimo.

The S55 does share the same hull and combination engineering as the M55, and from a manufacturing and development point of view, it was important for us to keep core elements of the models the same. Much as you would in an automotive engineering environment, you can create multiple model iterations from that same base platform. We realised, it is going to be better for the evolution of our product lines if we can keep key elements the same, and then, if one of these key elements changes it is easier for us to make the change across the whole range very quicky.

From there up however, we have looked at the S55 as a completely new design in terms of how the flow of the boat works.

What would you say are the main design successes of the S55?

One big thing we’ve achieved with the S55 is maximising space onboard. It is really going to rival boats already on the market that are in that mid 60-foot category. We carefully considered all space indoor, outdoor and below deck and thought about how we could get the most out of the S55.

We tried to use as few steps as possible throughout the design process and this not only makes it easy for you to navigate the boat, and improves the flow of the boat, but also means that we were not eating into potential accommodation space just with steps. So, from the adventure deck to the cockpit to the galley to the saloon, it’s all just a single step between zones.

This idea, which we feel we have executed perfectly, improves the flow of spaces onboard with zones seamlessly interacting with each other. Each zones particular layout has been designed with ease of navigation in mind, the zones themselves flowing seamlessly into one and other so as not to have people in the way of each other when onboard.

What about the S55 would you say appeals directly to the Australian user?

One thing that we always do when starting a design process is to look at what our product actually is; determining its core values and core requirements are key before launching in the Australian market. The S55, like the rest of our models, is a long-range product. Even though we send our boats all around the world, they’ve got to be fit for the Australian coast. The boat can’t just be designed for costal marina hopping, you’ve got to go out the heads and you’ve got to go long distances if you want to do any sort of serious boating. People like to be able to go away for extended periods of time so yes, they need a reliable boat and a boat that can go offshore. They need a big fuel capacity certainly, but what they also need are the facilities to live onboard for several weeks in absolute comfort.

They need a galley that’s going to store a lot and is equipped with capable appliances to the point where it feels like a household kitchen. When you compare our galleys to most competitors, ours is usually much bigger and this is purely because the boat has been designed for how our customers use their boats.

What is your favourite feature of the S55?

I would say the vista windows on each side are really an excellent feature. Not only do they let a lot of light in, but the manual sliders allow you to open the saloon all the way up and with the sunroof as well that area is fully convertible. They’re really cool and when you’re standing out on the boat in fine weather, you just can’t beat it. We first bough them in as an option on the X Series, and I think we’ve only had 2 boats since that haven’t been spec’d out with those. They’re a real feature that our customers are just loving.

What was the thought process behind the hardtop tender storage? That seems to be something new for the S Range.

In coming to that decision, we looked at a lot of Coupes on the market. It is always just a big flat area up there on the hardtop anyway. We also took inspiration from the modern SUVs that we see on the road. People driving around the road nowadays always have roof racks. As you’re probably aware Maritimo started in the enclosed flybridge sector, and in the enclosed flybridge market just about everybody is running tender storage up on the foredeck. It’s handy, it’s drier, you can see it when you’re underway.

The hardtop storage also allows you to have a larger tender, allowing the S55 to compete with boats in the mid 60-foot category, those bigger boats usually having a bigger tender to go with them.

The other obvious advantage of storing up there on the hardtop is that it gives us much more space. With this S Series you’re not wasting real estate and the hardtop storage works great for kayaks and paddleboards as well.

So, the boat can be spec-ed with a 250 or 350kg davit, but if that isn’t what you want, we have the 2.9m garage at the back as well, or the tender can be run conventionally on the swim platform.

What would you say makes the S55 distinctly Maritimo?

The S55 is equipped with several Maritimo hallmarks. It’s straight shaft drive which is something we have always stayed true to. Going back to that long range philosophy, our customers always need something that is dependable and reliable, and the straight shaft drive keeps the engineering as simple as possible. We’ve always stayed true to shaft technology, even in times when many other manufacturers branched off and did other things, meaning that we’ve just incrementally evolved, developed and improved.

The other thing that I would say makes the S55 distinctly Maritimo again would be the maximising of space, but this time looking towards the accommodation areas. Our queen cabin is much larger than most, and our starboard guest cabin is particularly impressive in its beam. If you compare that guest cabin with a competitor in the mid 50-foot bracket, most are using overhead stacked bunks or if they are side by side, the overall beam is much narrower. Whereas this is a generous size twin cabin where the beds can slot together to form a double, or be separated and provide really good space in between.

The master is the cabin however which has really seemed to impress people. As I said before, throughout the design process we tried to minimise steps as much as possible and the rewards of this are reaped in the master, with a flat floor and flat ceiling all the way through the cabin. It is a genuine stateroom, and the lack of steps makes the room feel really big and comfortable.

Finally, you’ve already explained how the S55 is ideal for the Australian user and the Australian market. How does this translate into the US market?

We’ve been in the US market for a long time now. We took our flybridge models over there originally around 2006 and since then all we have done in that space is expand, with over half of our production now going to the US. We have a big base of owners in the US and we have already taken some orders for the S55.

Again, buyers in the US are going after Maritimo for the same sorts of reasons as Australians. They’re great seagoing, long range boats and fill our customers with a lot of confidence. Being Australian built, Maritimo vessels are up there with the best in the world in terms of build quality and owners can step aboard and see the difference when compared to a mass-produced boat from a European or Asian yard.

I also think the reliability of our shaft technology plays a big part as well.

Certainly an interesting discussion and interesting insight into the mind of a designer here with Tom Barry-Cotter, making it known that a lot goes into the design process behind every vessel built by Maritimo.

The S55 really is a sight to behold, not only being a long range and reliable vessel, but also a smart and spacious one too. An exciting prospect for the future of Maritimo and the future of motor yachts in this mid 50-foot category.