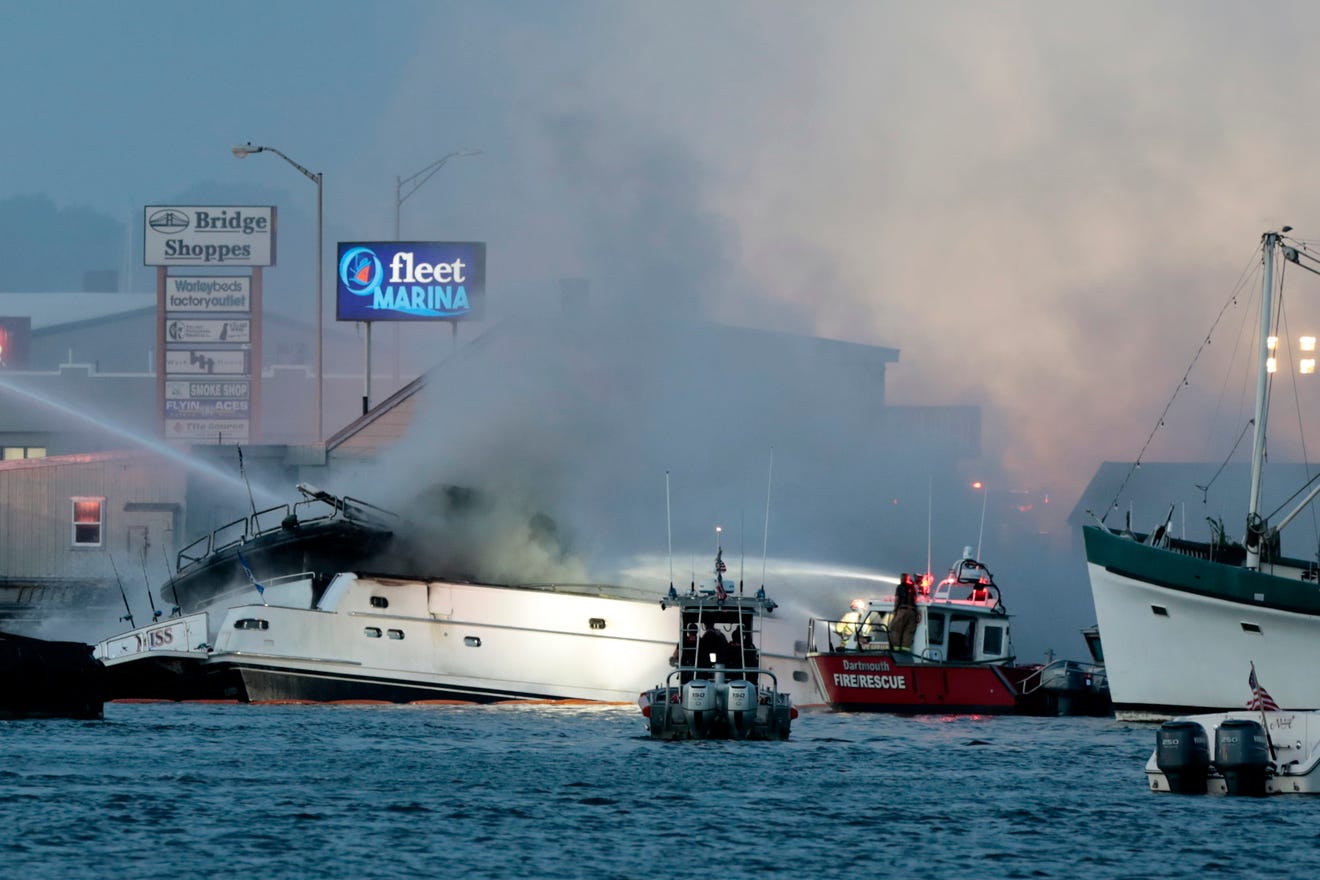 State and local officials were on the scene at Pope’s Island Tuesday after a devastating fire consumed a multimillion-dollar luxury yacht the day before at Fleet Marina.

The cause of the fire was still under investigation Tuesday; however, Timothy Cox, Fairhaven harbourmaster, said he was told there was a dinner party aboard the 82-foot yacht, Miss Dunia, before the fire broke out.

On Tuesday morning, officials on the scene were containing pollutants such as fuel, and firefighting with foam from the burned-out yacht. Petty Officer Colt Cotten, a U.S. Coast Guard pollution responder, flew a drone over the scene and said the sheen from fuel had spread about 700 feet. Crews were working on containment and considering placing a second boom ring around one already there. Cotten said the goal was to keep the impact as small as possible, putting it in perspective by saying a cup of diesel fuel can spread multiple miles.

Lt. Lionel Tetreault, a New Bedford fire inspector, called the fire “severe,” and said that in addition to containing the fuel spill, crews would be working on pulling the vessel from the water.

The vessel will probably be taken to the Fairhaven shipyard, Cox said.

Frank Corp. Environmental Services and Tucker-Roy Marine Towing and Salvage Inc. are working the cleanup and salvage end of the operation, he said.

New Bedford Fire Chief Scott Kruger told WCVB news that the first call came in just after 5 pm about smoke coming from the boat. By the time crews arrived at the scene, fire had broken out below the deck.

The fiberglass construction of the yacht made for a long-burning fire that could be smelled from area towns, fire officials said.

Officials reported no injuries from the fire.

Estimates from New Bedford fire officials was that the yacht was carrying 300 to 500 gallons of fuel. Crews had to use water and foam to douse the flames.

Kruger said the fire went to a second alarm and multiple crews from surrounding communities, including Fairhaven, responded to assist the New Bedford Fire Department, along with the U.S. Coast Guard.

“Everybody got off safe, so that’s a big plus,” said Dan Pacheco, dockmaster of Fleet Marina. Miss Dunia’s home port is in Florida, but the yacht had been here for about three weeks, he noted. The yacht is owned by Lars Vinjerud II, who also owns Fleet Marina.