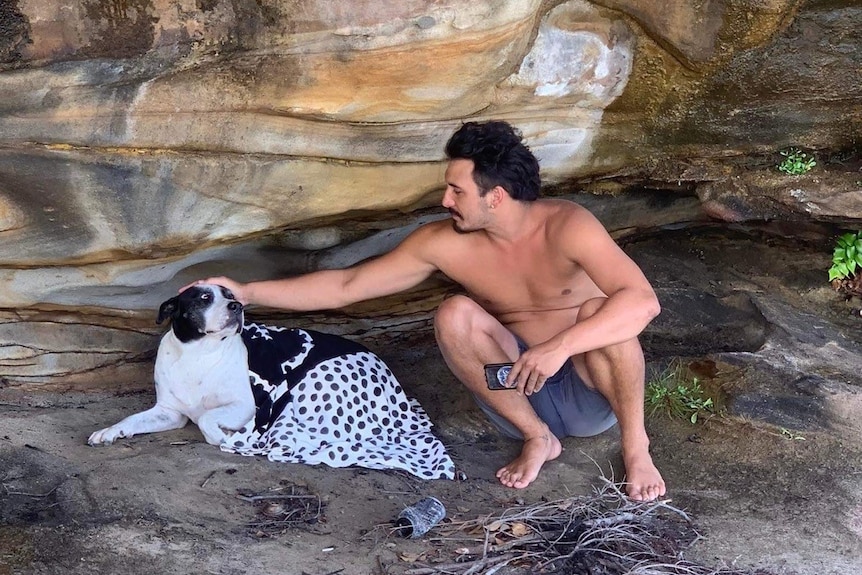 A large-scale search continues after a boat capsized on Friday night in Sydney’s North Harbour, with one man missing after his dog and another man were found alive.

NSW Police said the man, 49, his dog, Max, and another male, aged 25, boarded a 12-foot runabout that left Tunks Park boat ramp near Cammeray about 9:00pm on Friday.

The boat had no life jackets, safety gear or lights on board.

Northern Beaches Police Area Command Inspector Andrew Veale said the boat had flipped after being hit by large waves as it made its way to Dobroyd Head from Clontarf.

“The boat has overturned, throwing the two occupants and one of the occupant’s dog into the water,” Inspector Veale said.

“Both the occupants clung to the boat for some time, the dog was washed away and after some hours one of the occupants drifted away from the boat.”

Police say the older man was interested in buying the boat and that’s why they were out on the water.

The men had known each other for a couple of years and were friends.

Early on Saturday morning, the 25-year-old Northbridge man was located in the water by a local fisherman.

He was retrieved by surf life savers on jet skis and taken to Little Manly, where he was treated by paramedics for hypothermia and abrasions to his arm and wrist. He did not require hospitalisation.

“We’re positive, as I said there’s a large-scale search happening and it will go on until the matter is resolved either way but we are confident and want to be confident,” he said.

Debris from the boat including a fuel tank and some rubber mats was recovered about 9:30am Saturday morning and not long after, Max was found in a cave at Balgowlah Heights.

Luke Saunders was at Washaway Beach celebrating a friend’s birthday when they were alerted by a coastal guard that a dog was seen in the area and a boat had capsized.

As soon as they worked out what was happening, they ran up the coast and saw a black-and-white dog come out of a cave.

“He was just really spooked and we just took care of him and gave him water and food, I lay him down and he kept shaking,” Mr Saunders said.

“He was really friendly, he had a good heart once we showed him some love … but he was very spooked, he kept shaking and he was really exhausted and he was trying to curl up inside the cave”.

He said they kept running along the coast calling out to try to find the dog’s owner but did not find anything,“We came back and looked after the dog until people came, we tied a towel sling around him and lifted him up the rocks and they took him away.”

Inspector Veale said the dog had been taken to a vet.

NSW Police said the incident was a timely reminder that people needed to take safety precautions when heading into the water, including carrying life jackets and communications devices.

Water police are continuing to search with other emergency personnel joining them on Sunday morning.

We encourage readers to practice life jacket safety at all times when boating, click here for more information.