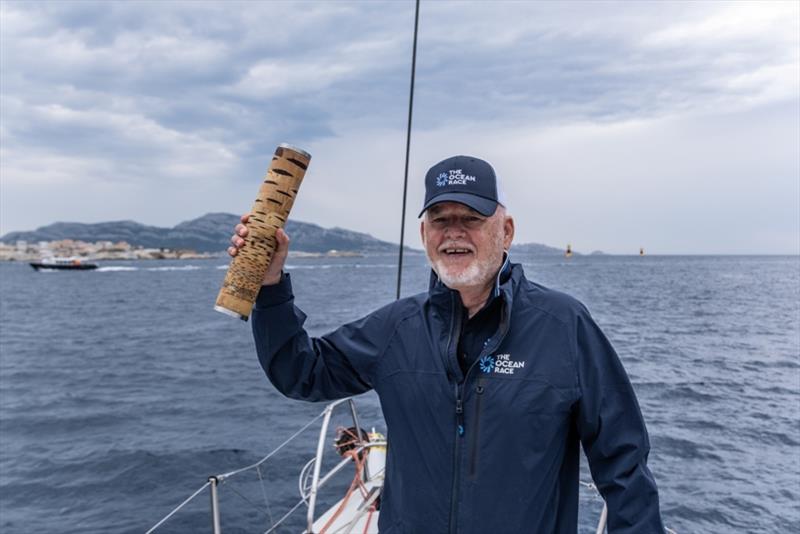 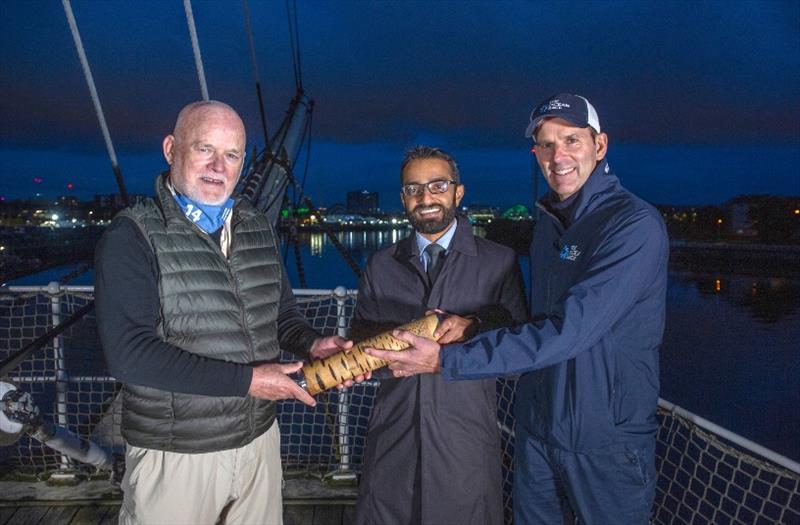 COP 26 UN Special Envoy for the Oceans Peter Thomson and Richard Brisius, Race Chairman of The Ocean Race arrive in Glasgow for COP 26. Onboard the Tall Ship Glenlee and meeting Vel Gnanendran, Climate and Environment Director

Nature’s Baton, the symbol of Relay4Nature, has been welcomed at the landmark event by Vel Gnanendran, Director for Climate and Environment, Foreign Commonwealth and Development Office.

Relay4Nature, an initiative by The Ocean Race and Ambassador Thomson, is at the UN Climate Change Conference, COP26, to highlight the critical role the ocean plays in mitigating climate change and to call for world leaders to take urgent action to protect it.

The Relay4Nature baton was passed from the UN Secretary-General’s Special Envoy for the Ocean, Ambassador Peter Thomson, to Vel Gnanendran on the deck of the iconic Tall Ship Glenlee, on the banks of the River Clyde in Glasgow, on the first day of the world’s crucial climate change conference.

Together with Ambassador Thomson, The Ocean Race, the round-the-world sailing event known as the toughest test of a team in sport, created Relay4Nature earlier this year to help ensure that the ocean is central to global discussions affecting the planet’s future. Nature’s Baton symbolises the fact that the world’s existential challenges of climate change and biodiversity loss are inseparably linked with the state of the ocean’s health.

Receiving the baton on behalf of COP26’s landmark event, Vel Gnanendran said: “The ocean is critical to life, about three billion people in the world depend on the ocean, it is critical to livelihoods, biodiversity and saving our planet. The science tells us that we must protect 30% of the ocean by 2030, I think that is the very least we should be doing. I hope that we can see governments and non-governmental players all committing to take action to protect the oceans but not only taking the action but by putting the finance behind those actions. It is a real honour to receive Nature’s Baton on behalf on the UK COP26 Presidency and I really want to commend everyone involved in Nature’s Baton and the baton Relay for raising the profile of the ocean and galvanising actions around protecting it.”

Ambassador Thomson, said that Nature’s Baton is giving the ocean a voice at crucial environmental conferences and is, “part of an international effort to break down the silos that have often impaired the outcomes of these conferences. Relay4Nature is demonstrating connectivity, and underlining that our planetary problems and solutions all stem essentially from the same universal activities of humankind.”

Relay4Nature will feature throughout COP26, collecting and sharing messages from delegates about the action that world leaders need to take to protect the planet. The Ocean Race and Ambassador Thomson will host a side-event on Monday 8th November, where, along with special guests, they will analyse the ocean’s role in the global negotiations so far.

The Relay4Nature initiative is supported by 11th Hour Racing, Founding Partner of the Race Sustainability Programme and Premier Partner of The Ocean Race.

Richard Brisius, Race Chairman of The Ocean Race said, “Climate change is taking a devastating toll on our blue planet. Seas are becoming warmer, more acidic and levels are higher, significantly impacting, not just the species that live in them, but humans too.

“The ocean may be a victim of the climate crisis, but it also holds the solutions. In fact the ocean is a true climate hero. It provides half of the world’s oxygen, locks away a significant amount of carbon dioxide and absorbs heat, making it our most crucial ally in the fight against climate change. Through Relay4Nature we want to highlight that it is absolutely critical that the ocean has a seat at the negotiation table at COP26.”

COP26 takes place six years after the milestone Paris Agreement, which set out the critical emissions reduction targets the world needs to meet in order to avoid catastrophic climate change. Leaders from across the world will attend the conference in Glasgow (1-12 November), where it is expected that commitments will be made for more ambitious and decisive action.

Ahead of COP26, messages have been collected by Relay4Nature from a diverse mix of heads of state, ministers, business leaders, sailors and ocean lovers, including HSH Prince Albert of Monaco, the European Commissioner for Environment, Virginijus Sinkevicius, and the UN High Level Climate Action Champion for COP26, Nigel Topping. Each baton holder is asked to share their greatest concern related to the future of the planet and an ask to world leaders on the vital action required. Their messages are carried within the baton.

As well as connecting the major challenges to the planet, Nature’s Baton links the world’s major environmental conferences. It played a significant role at IUCN World Conservation Congress in Marseille in September; and following COP26, will make its way to UN Environment Assembly in Nairobi in March, the UN Biodiversity Conference in Kunming in April, and UN Ocean Conference in Lisbon in June.

The baton was also passed between sailing teams during the inaugural edition of The Ocean Race Europe earlier this year. It reached Glasgow following a six-day cycling relay from Southampton, on England’s south coast, to Scotland, organised by GAC Pindar: the Official Logistics Provider of The Ocean Race 2022-23, with support from Volvo Cars, Premier Partner of the Race, who supplied two hybrid support vehicles for the relay.