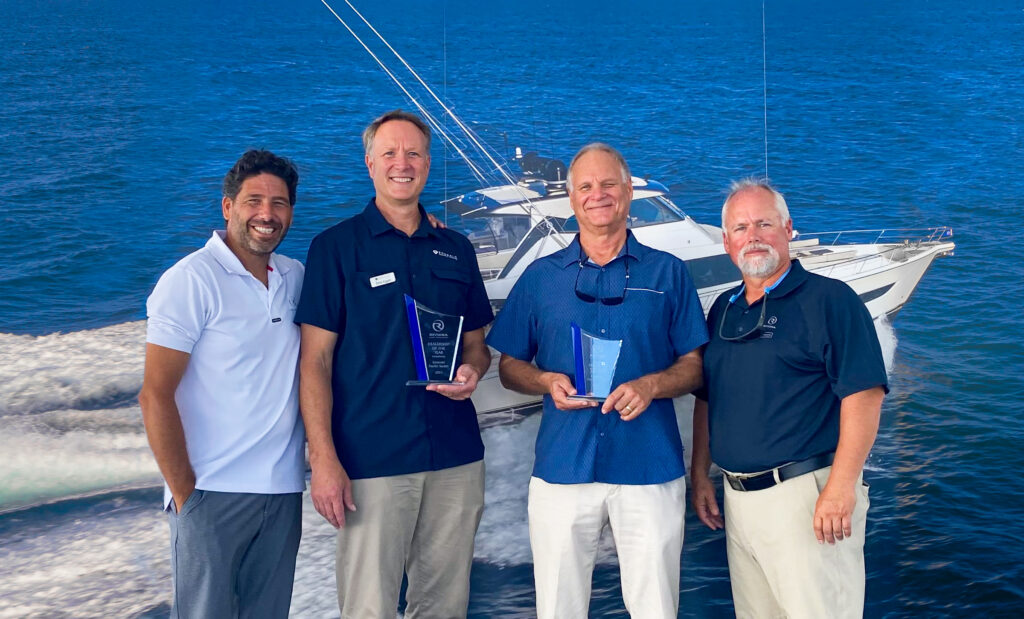 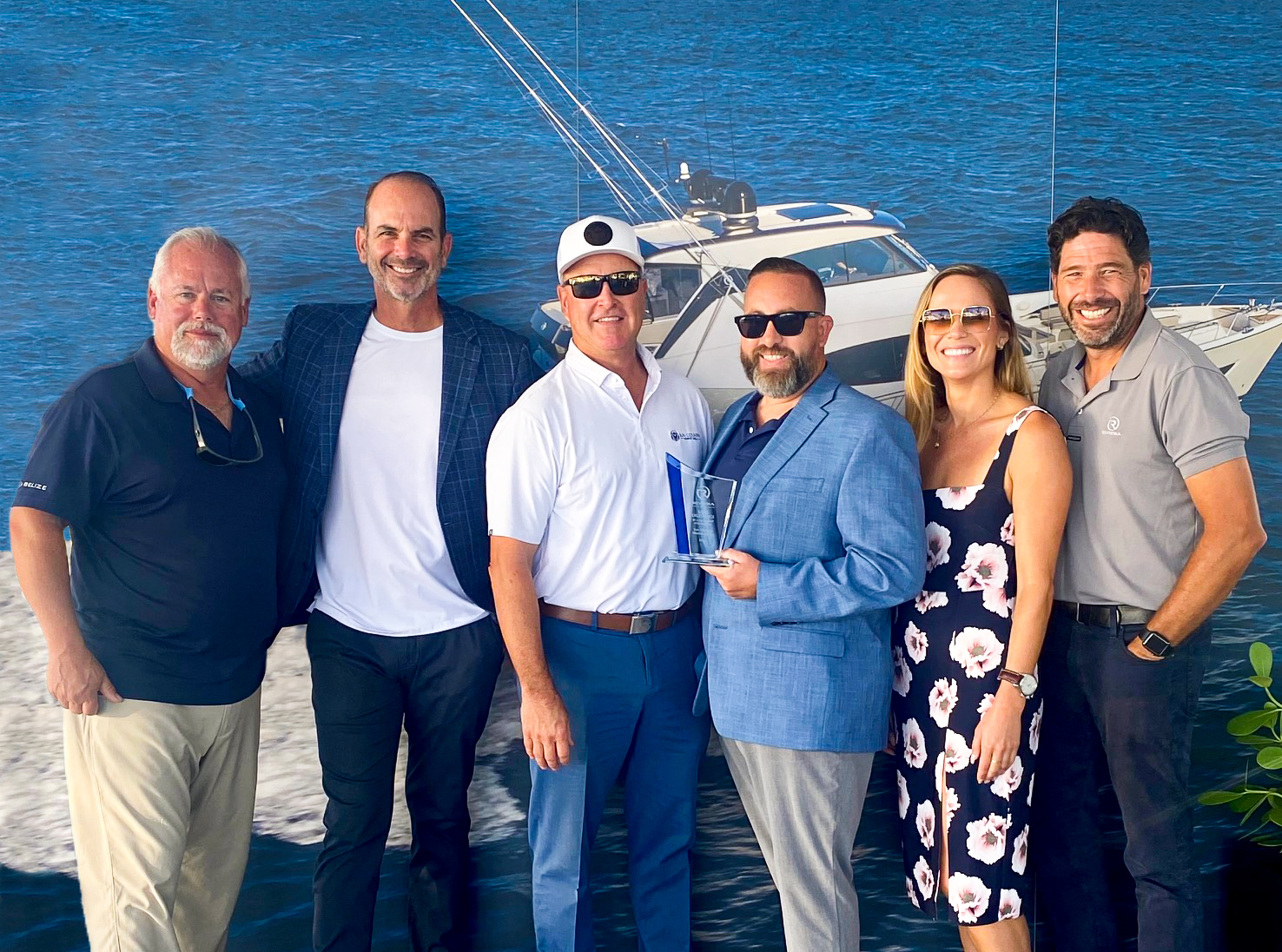 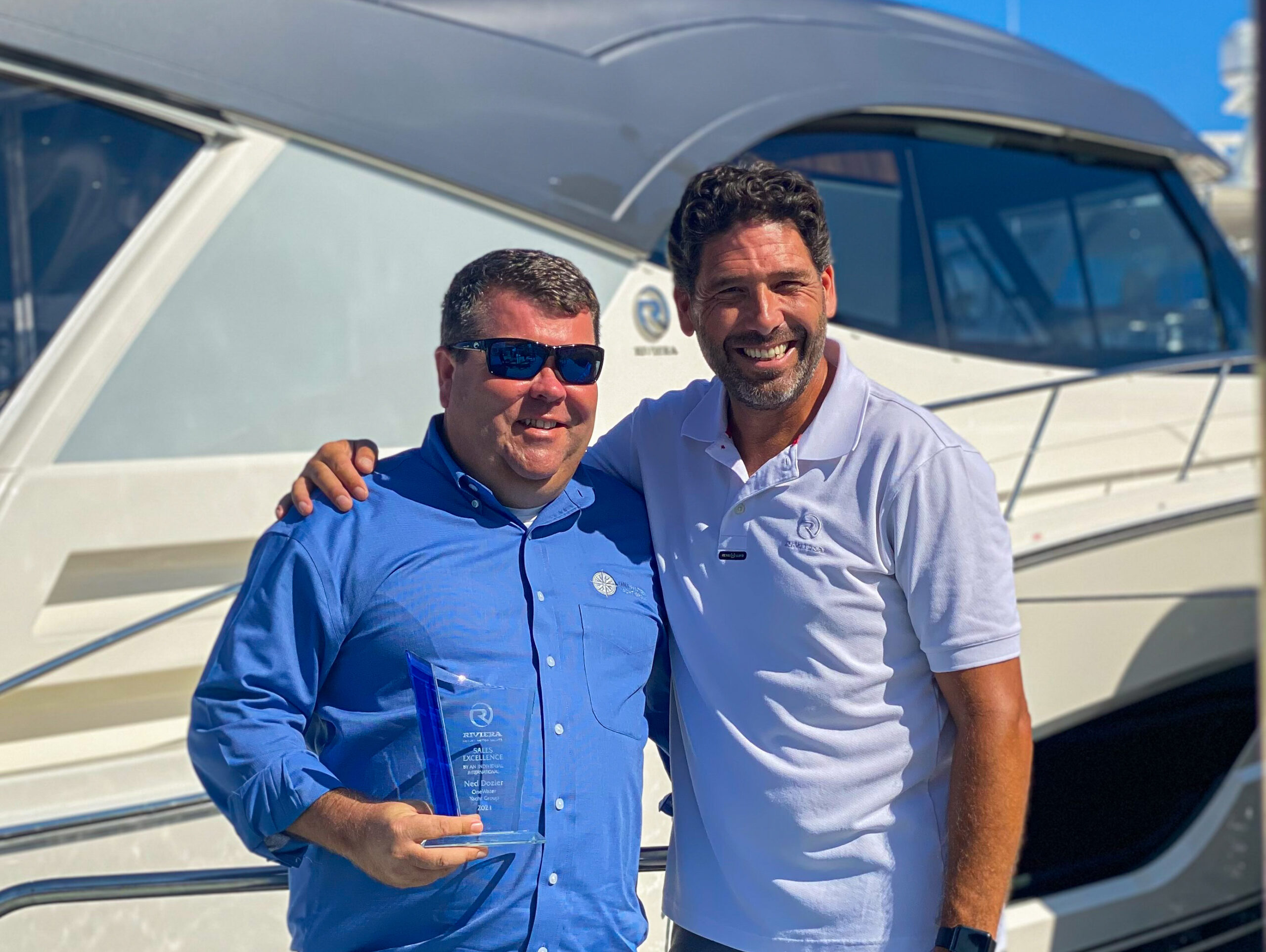 Ned Dozier (left), of OneWater Yacht Group, is presented with the Sales Excellence by an Individual Award 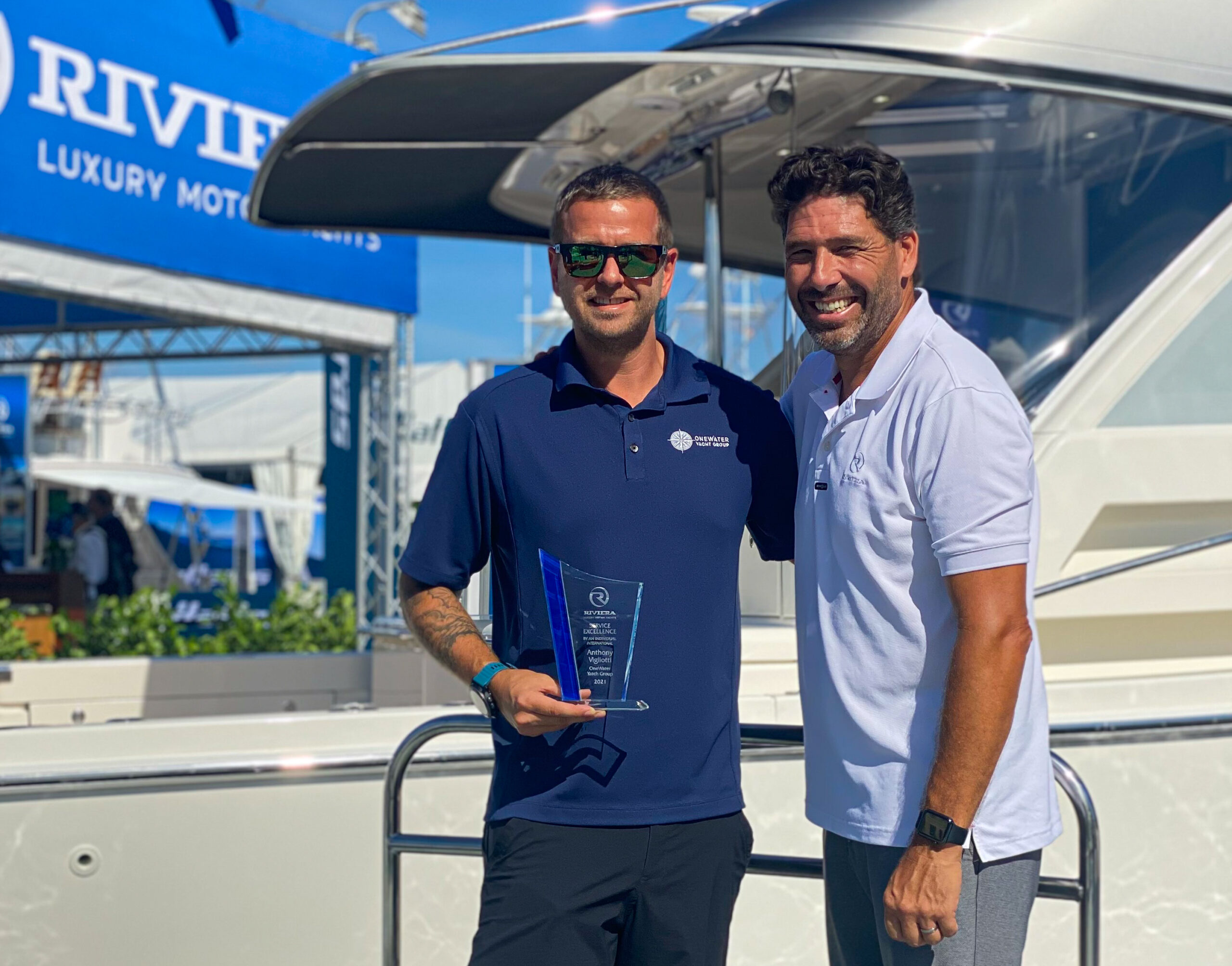 Anthony Vigliotti (left), of OneWater Yacht Group, accepts the award for Service Excellence by an Individual 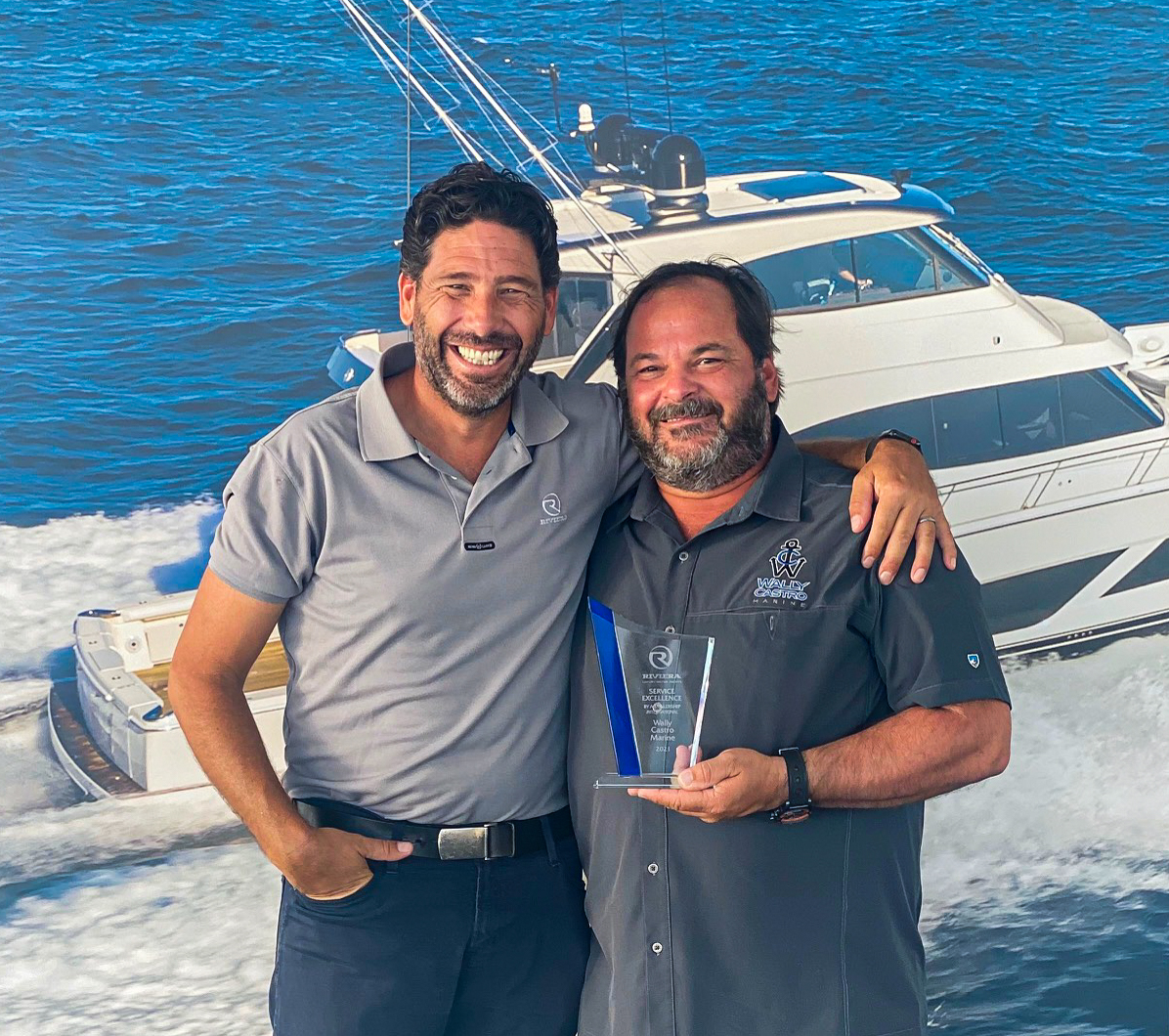 Riviera, Australia’s luxury motor yacht builder, has named Emerald Pacific Yachts in Seattle, USA, as the company’s International Dealership of the Year for 2021.

The award was among six announced by Riviera this week, recognising excellence in service, sales and owner care over the 12-month period to June by Riviera representatives located outside of Australia and New Zealand.

The awards were presented at the opening of the Fort Lauderdale International Boat Show, the world’s largest in-water show, that concluded on Sunday.

Riviera presented its largest international showcase at Fort Lauderdale with 10 magnificent yachts on display from 39 to 72 feet from the Sports Motor Yacht, SUV, Flybridge and Sport Yacht and Belize collections – including the Americas premiere of the 645 SUV.

Dealership of the Year

As International Dealership of the Year, Emerald Pacific Yachts has been awarded for its positive team environment, exclusive owner events, professionalism when engaging with the Riviera team and its continual reinvestment in the Riviera brand.

Event Excellence by a Dealership

Emerald Pacific Yachts was further awarded for Event Excellence by a Dealership, highlighted by the hugely successful Riviera Rendezvous organised by the Seattle-based representative. More than 80 friends and family aboard 25 Riviera motor yachts enjoyed an exceptional rendezvous at Roche Harbour in the San Juan Islands.

Sales Excellence by a Dealership

Sun Country Marine, which operates on the US west coast from five locations including Newport Beach, San Diego and Dana Point, was presented with the Sales Excellence by a Dealership Award. It was the second consecutive year that Sun Country has received this award.

Service Excellence by a Dealership

Wally Castro Marine, located in the heart of the Caribbean in Puerto Rico, was awarded for Service Excellence by a Dealership, driven by a culture of superior owner care, quality control and the continuous improvement in the level of services provided across the dealership.

Sales Excellence by an Individual

Individual excellence came to the fore in this year’s awards for OneWater Yacht Group, as sales executive Ned Dozier was presented with the Sales Excellence by an Individual Award. It was the second consecutive year that Mr Dozier, who is based at Stevensville, Maryland, received this award.

Service Excellence by an Individual

OneWater’s service manager Anthony Vigliotti, based in Florida, was presented with the Riviera Service Excellence by an Individual Award, capping off a double recognition for the dealership and recognising his exceptional service to motor yacht owners.

Riviera owner Rodney Longhurst has praised the professionalism and service excellence that continues to advance across the company’s global representative network.

“The commitment of our global representatives to Riviera truly aligns with the passion and dedication of our 850-strong team in building world-class motor yachts for boating enthusiasts around the world,” said Mr Longhurst.

“I am extremely proud to see these awards acknowledge the exceptional work undertaken throughout our network in achieving this goal.”