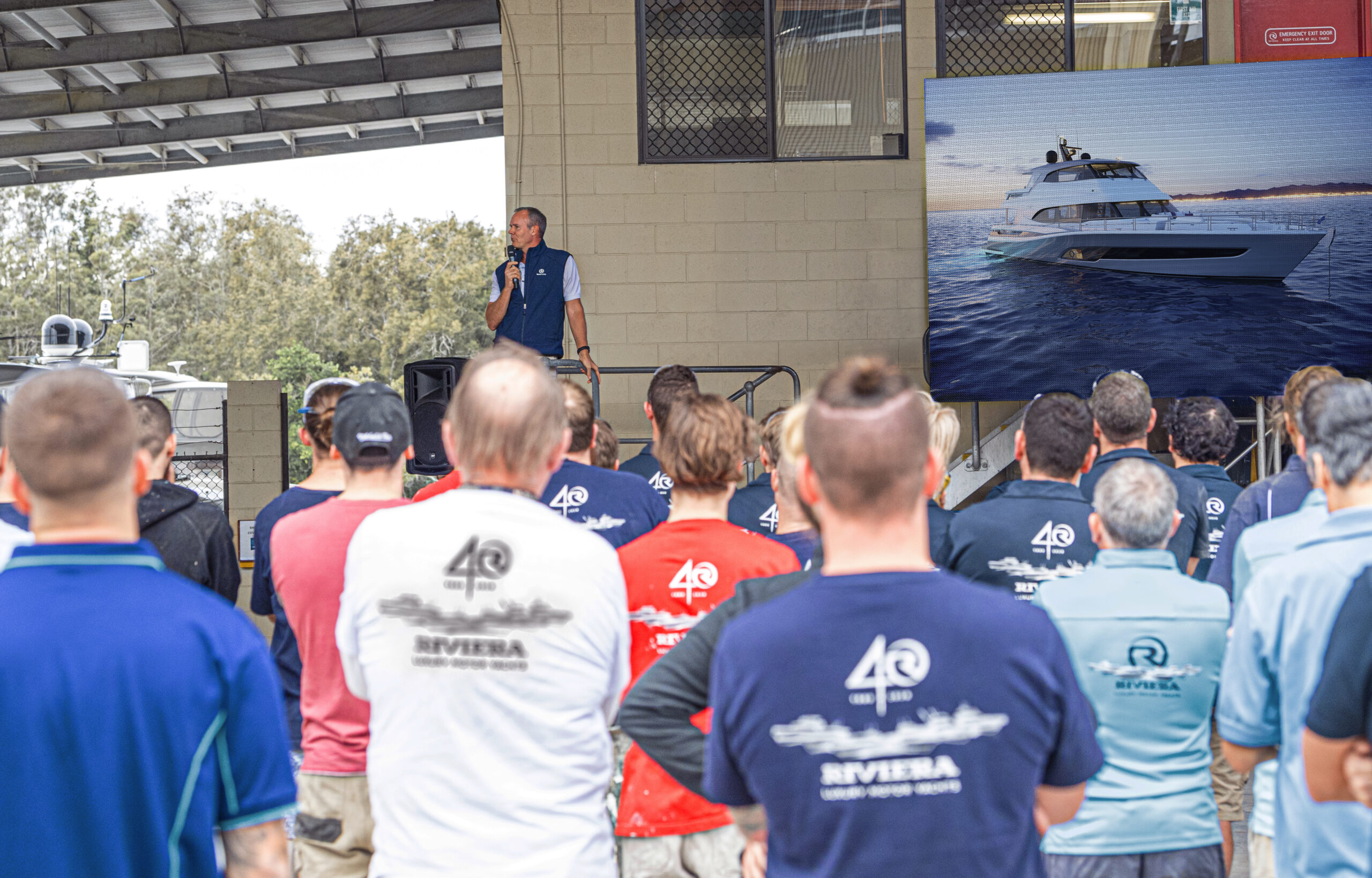 A welcomed time-out from a busy schedule was enjoyed by Riviera’s 800-strong team as owner Rodney Longhurst hosted a special thank you lunch at the company’s state-of-the-art boatbuilding facility on the Gold Coast.

Mr Longhurst acknowledged the efforts of the entire Riviera team for the outstanding achievements by the company this year, culminating in an exceptional showcase at the Sanctuary Cove International Boat Show where Riviera welcomed more than 25 new motor yacht owners.

Riviera’s largest motor yacht display for the year was accompanied by the Riviera Festival of Boating, an exclusive event attended by 600 Riviera yacht owners and their families, and which comprised 40 boating seminars and on-water workshops designed to empower owners to enjoy their boating to the fullest.

The Riviera team’s significant preparations for the boat show this year also included the world premiere of the 645 SUV, in addition to the official announcement of a new Riviera flagship with the 78 Motor Yacht.

The sophisticated 78 MY design represents a distinguished new era for Riviera, delivering the perfect combination of family cruising, entertaining and blue-water passage-making capability. The 78 MY will have her world premiere in early 2022.

In his talk with the Riviera team, Mr Longhurst praised their dedication to excellence that has positioned the luxury blue-water boating reputation of Australia’s premier luxury motor yacht builder to be among the best in the world.

“We’re building world-class motor yachts – that is indisputable, and this reputation has been 41 years in the making, with the last 10 years being exceptional,” said Mr Longhurst. “We’ve been building towards this long before the current market, and we will continue building on this well into the future.”

In a reminder of what drives Riviera’s pursuit of excellence, the Riviera team was introduced to the new owners of the first Riviera 645 SUV, the Haddrell family, featured on the big screen as they and their extended family stepped aboard their new motor yacht for the first time.

“This is a wonderful reminder of why we all come to work each day, and that is to create memorable, magic moments for our owners,” Riviera’s Brand and Communications Director, Stephen Milne, told the team.

Ray and Jenny Haddrell have owned seven Riviera motor yachts on their journey to the Riviera 645, highlighting the regard that Riviera enjoys among its motor yacht owners.

Mr Haddrell was lost for words as he and Jenny sat in the saloon of their 645 SUV, simply saying: “I’ve never been awestruck, I suppose.”

“This is the ultimate cruising boat, it ticks all the boxes,” said Mr Haddrell. “All the other boats I’ve had I’ve never been able to use the foredeck before. On the front foredeck of the 645 SUV, I can seat up to 14 people. Then I have the cockpit, the mezzanine or the saloon lounge here where I can seat a large group of people. It’s like a luxury hotel room, only you can move it anywhere you like.”

Mrs Haddrell described their new 645 SUV as ‘a big step upwards in luxury and a great feel’.

Mr Longhurst expressed his great pride in the team for today’s Riviera motor yachts that are acknowledged by Riviera owners as the best the company has ever created.

“Building world-class yachts requires a world-class attitude and none of this is possible without you working together as a team, supporting our new apprentices and mature trainees and each other and, in so doing, passing your knowledge and skills on,” Mr Longhurst said.

“No matter where you work on site, everyone here plays an important part in our future. It is tremendous to be part of and I am extremely proud of you all.”

Riviera is on track to build more than 120 motor yachts in 2021, a growth of almost 30 per cent from the previous year. Over the past 41 years, the company has launched more than 5700 Riviera motor yachts that are now being enjoyed all around the world from the South Pacific and Asia to the Americas and Europe.