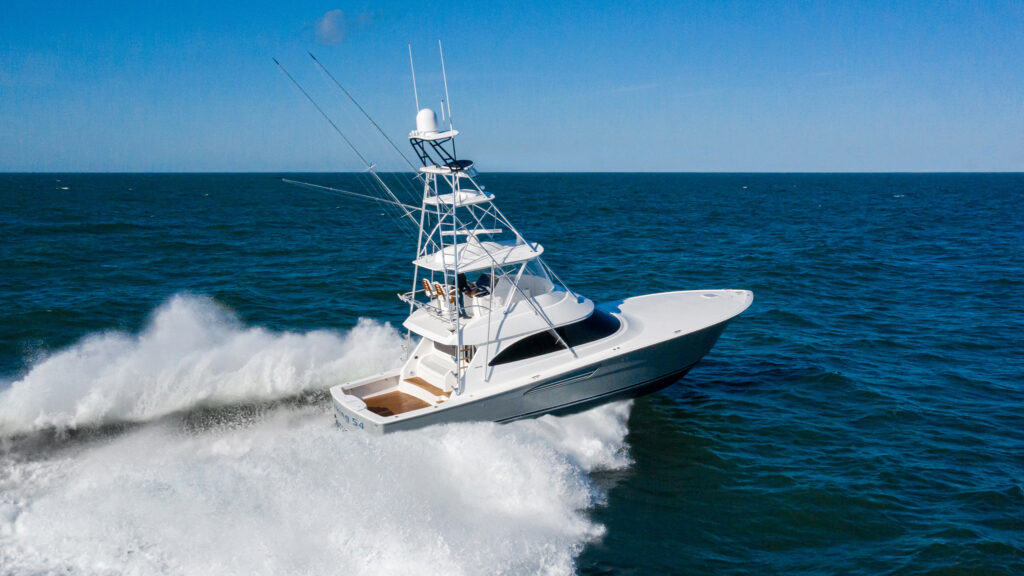 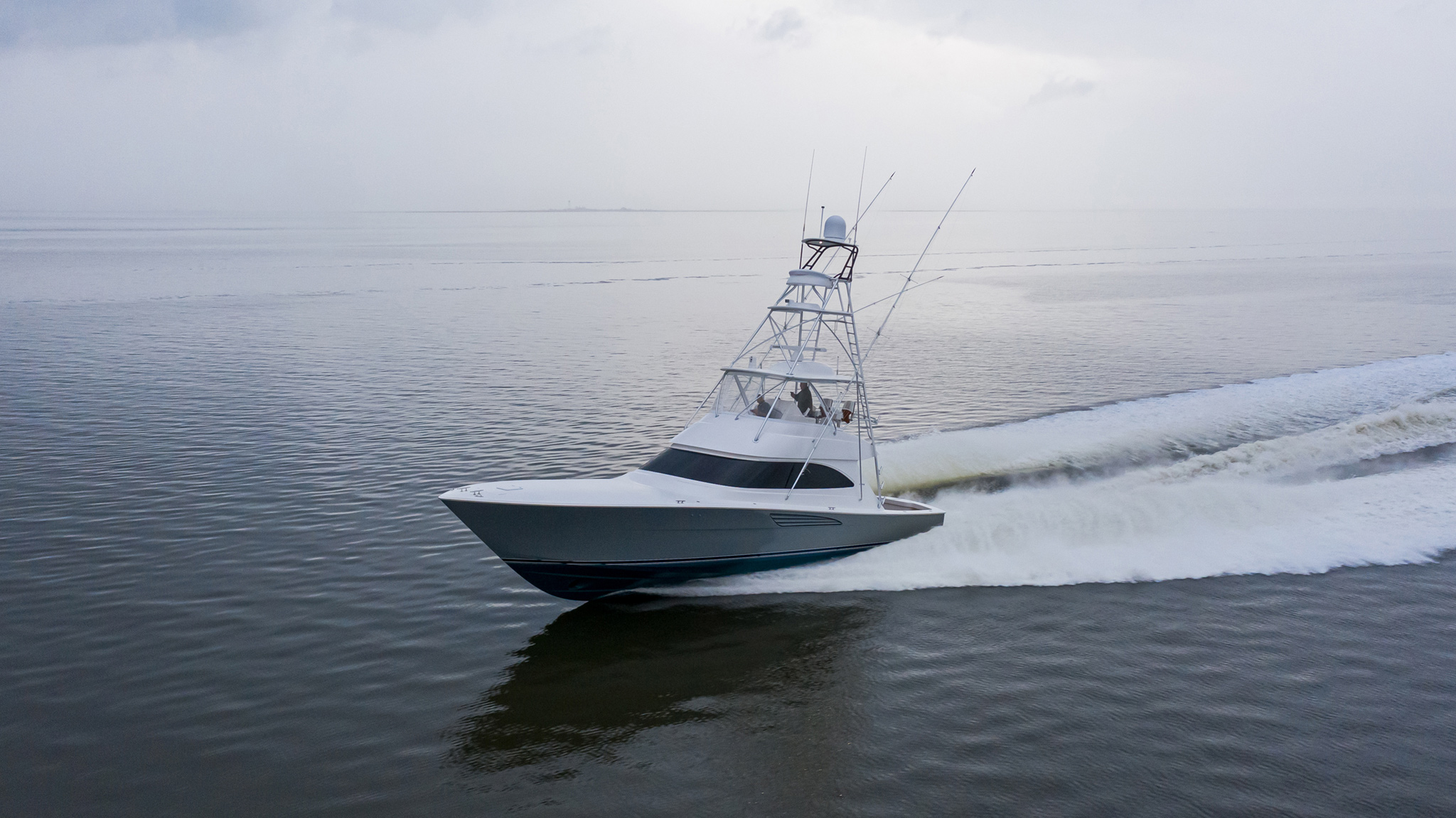 Following their mantra to build a better boat every day, Viking has consistently brought new and exciting yachts to the market since 1964. With multiple generations in various size ranges, their commitment to their customers and level of expertise shine through with every new model.

That proficiency is particularly strong in the 50 to 60 foot sportfish boat genre, where Viking has introduced 10 models in the past two decades. This legacy fleet consists of more than 600 Vikings and includes ground-breaking models such as the 60 and 55, two renditions of the 52 Convertible and the first-generation 54.

“No one has done a better job in this segment of the market,” says Viking President and CEO Pat Healey. “Over the last 20 years, we’ve designed more boats from 50 to 60 feet than any other manufacturer in the industry. This is absolutely our sweet spot.”

The New Jersey boatbuilding powerhouse has reaffirmed its domination of the mid-size convertible with the new Viking 54. The three-stateroom, two-head open bridge yacht pushes the owner/operator convertible to the highest levels of engineering, performance, accommodations and sportfishing capabilities. The Viking 54 has been a smash hit since making its world premiere at the 2020 Fort Lauderdale International Boat Show, where hull No. 1 (a Haze Grey thoroughbred with a teak cockpit and a stunning walnut interior) captured the NBC Sports Best of Show Award.

The Viking 54 sets new milestones of innovation while integrating ideas garnered from sales and owner feedback, as well as thousands of hours logged by our Viking demo teams on the tournament trail. “We’re in a constant state of refinement,” says Viking Design Manager David Wilson. “Everything from interior and exterior design and accommodations to performance, fishability and ease of operation are evolving.”

The hull is built with an engineered composite of fibreglass fabrics and coring that’s vacuum-infused with vinylester resin. Utilising a calculated resin to fibreglass ratio, great stiffness and strength is brought to the structure while minimising weight. The structural bulkheads and fuel tanks (which are customised to the shape of the hull) are also resin infused. The hull-to-deck is through-bolted every three inches and fibreglassed from inside for a rock-solid union.

The 54’s business end offers more space than any other boat in its class. The 154 square foot unobstructed cockpit comes to the fishing wars with the ammunition to put you in the winner’s circle, starting with moulded non-skid on the cockpit sole for grippy footing (even when wet) and large scuppers to drain water quickly. The cockpit, covering boards and mezzanine can be finished in teak, which also delivers excellent traction with low maintenance.

Guests will be enamoured with the raised observation mezzanine (pioneered by Viking) as they watch the action in comfort, shaded by the flybridge overhang. Smart storage solutions abound, with freezer and cooler space under the mezzanine for baits and drinks and a tackle cabinet on the starboard side. The inboard portion of the mezzanine provides access to the engine-room. An anodised aluminium ladder with nonslip treads (and a handrail at the top) provides secure egress to the flybridge. In the salon step, an insulated drink box means you can quench your thirst without missing any of the action.

The 54 can be outfitted with a custom designed and fabricated Palm Beach Towers tuna tower and equipped with navigation, communication and entertainment systems from Atlantic Marine Electronics. These two Viking subsidiaries play critical roles in making our yachts turnkey ready.

Making full use of the 17’8″ beam, the 54’s layout accentuates the impressive size of her interior. The key to the configuration is the uninterrupted companionway that stretches from the starboard-side salon door all the way to the forepeak. The lounge area and galley are to port, while the dinette is to starboard. “The layout has been a huge success on our 58, and we’ve been able to bring it to the 54,” says David. “It really opens up the entire living space.”

High-gloss teak or walnut is offered for the 54’s interior, and a satin finish is optional. Premium wall-to-wall carpeting and furnishings can be found throughout the climate-controlled living area. Air conditioning flows quietly from valances for comfortable cooling and thorough distribution. A hi-lo cocktail table joins the L-shaped lounge with storage below. Louvered blinds can be adjusted for desired natural lighting through large salon windows. The headliner features rows of recessed LED dimmable lights separated by walnut or teak strips. Control of the electrical systems is easily managed, with conveniently located distribution panels in the salon on the starboard side and in the galley, each equipped with simple-to-use and clearly labeled conventional breaker switches.

The optional MAN V12 1550CRM (1550 MHP) diesels power hull No. 1. With this propulsion package, the Viking 54 Convertible will have an estimated cruise speed in the mid-30-knot range with a top end of 40-plus knots depending upon load, sea state and boat condition. A pair of MAN V12 1400CRM (1440 MHP) diesels are standard.

Custom fabricated 1-inch-thick aluminium saddles are used to reinforce the installation of the engines to the yacht’s stringer and hull structure. The saddles are permanently affixed to the stringers using a specialised structural adhesive, effectively becoming integral parts of the stringer foundation to distribute the engine loads across the entire hull and stringer structure. The 54 Convertible’s custom engineering includes a fuel tank configuration that allows the installation of a sonar tube in the engine-room for Furuno’s 360-degree real-time sonar that’s become popular on the tournament circuit. The engine-room is also home to a user-friendly 21.5 kW Onan E-QD (electric quiet diesel) Series generator and batteries in custom fiberglass storage boxes.

Certainly an all round vessel from Viking Yachts, experts in design for this size category and leaders in the sports fishing field.