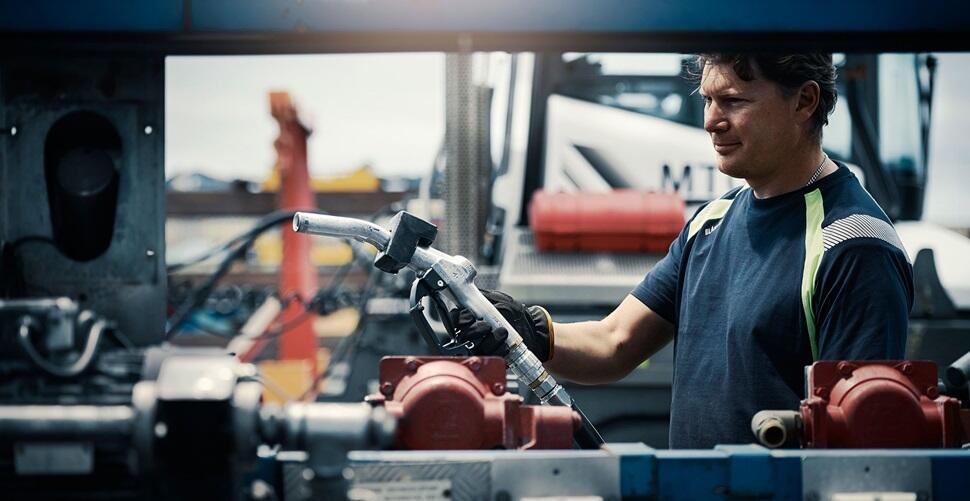 HVO can be used in Volvo Penta engines without modification

Gothenburg RoRo Terminal recently made the switch to 100% HVO fuel. Volvo Penta caught up with the terminal’s Technical Support, and Workshop Manager, Göran Dittmer, to hear about this milestone in the terminal’s sustainability journey and future plans to further emobility and electrification.

The Port of Gothenburg, Sweden, is made up of several terminals – one of which is the Roll-on/Roll-off (RoRo) terminal – Gothenburg RoRo Terminal. Earlier this year, the Port of Gothenburg released the most ambitious sustainability targets for any port in the world – to cut emissions by 70% by 2030. It involved everything in the port – from the traffic in the channel to the light bulbs in the terminals. The Gothenburg RoRoTerminal is already reaching these targets by using hydro-treated vegetable oil (HVO) – but the whole port of Gothenburg must collaborate to reach the target.

One of the main people behind the switch to HVO was the terminal’s Technical Support and Workshop Manager, Göran Dittmer. Göran has worked at Gothenburg RoRo Terminal since 1988 – rising through the ranks from technician to team leader and technical engineer. In his current position, he is responsible for all the machinery in the terminal. In total the terminal has around 150 units, including different sizes of terminal tractors – around 80 machines – forklifts, Reachstackers, containers, special goods, etc. It’s a big operation, and buying, selling, fuel, and maintenance all falls under Göran’s remit.

“Throughout my time at the port, I’ve always been interested in new technology,” explains Göran. “I always want to make the machinery better and, in that way, I’ve always been moving things forward while having fun at work! HVO is just another step in our sustainability journey.”

The move to HVO was not a snap decision, Göran and his team looked at a lot of different options before deciding that HVO was the best fit.

“In terms of versatility HVO is great,” says Göran. “You don’t have to upgrade the machines and you can mix HVO with traditional diesel fuel or even switch back to diesel if supplies are low to avoid downtime. By using HVO the terminal has reached this 70% reduction target – but we are working with the whole port to achieve the overall goal.””

The terminal has been using HVO since July 2019 – testing it first at 40% HVO mixed with traditional diesel then moving to 100% HVO. Today the terminal has accumulated ~190,000 hours of tests and the efficiency output of HVO-run engines are unchanged when compared to diesel.

Although the terminal tests proved successful, there were other obstacles to overcome. One of the main challenges the Gothenburg RoRo Terminal faced when switching to HVO involved the engine suppliers’ warranties.

“Initially, many suppliers did not accept HVO in the vehicle warranty,” says Göran. “So, we had to discuss with suppliers such as Volvo Penta who then revised our warranty.”

Volvo Penta has had a commitment to alternative fuels for some time now – with HVO being a preferred biofuel for Volvo Penta’s engines. Today, HVO is approved in all the company’s engines globally, without modifications – which enables customers to reduce the climate impact caused by fossil fuel by 50% up to 90% – depending on how fossil-free the fuel production is.

“You hear the term ‘sustainability goal’ a lot, but I see it more as a process that is constantly developing and changing,” says Göran. “By using HVO, our terminal has been able to reduce fossil CO2, emissions but we are always looking for the next best thing and for us, that’s electric solutions.”

Volvo Penta has strong historic ties with the harbour and uses it as a base for a lot of its electro-mobility testing. Recently, the electric drivelines for the TICO terminal tractor and Rosenbauer’s electric fire truck went through functional testing at the terminal.

“We’re heavily invested in our customer’s transition to electric solutions,” says Andreas Nyman, Manager Field Test, and Data Management at Volvo Penta. “By performing functionality test at the Gothenburg harbour we can develop our electric technology and share knowledge and enthusiasm with Göran and his team.”

Since the early 2000s, the Gothenburg RoRo Terminal has offered shore power for vessels at berth and in August 2020, the terminal introduced several electric forklifts to its fleet – the largest of them is 16 ton, which is one of the worlds biggest. The terminal is also looking into the electrification of its current machinery, which requires a huge amount of investment and infrastructure.

“There is no silver bullet,” states Andreas. “Emissions targets and legislation are always progressing as are our customers’ needs and demands. We provide solutions for the present, like HVO – which can be used in Volvo Penta engines without modification – while working closely with our customers to predict and test future solutions and bring them to market in the most efficient, reliable form.”