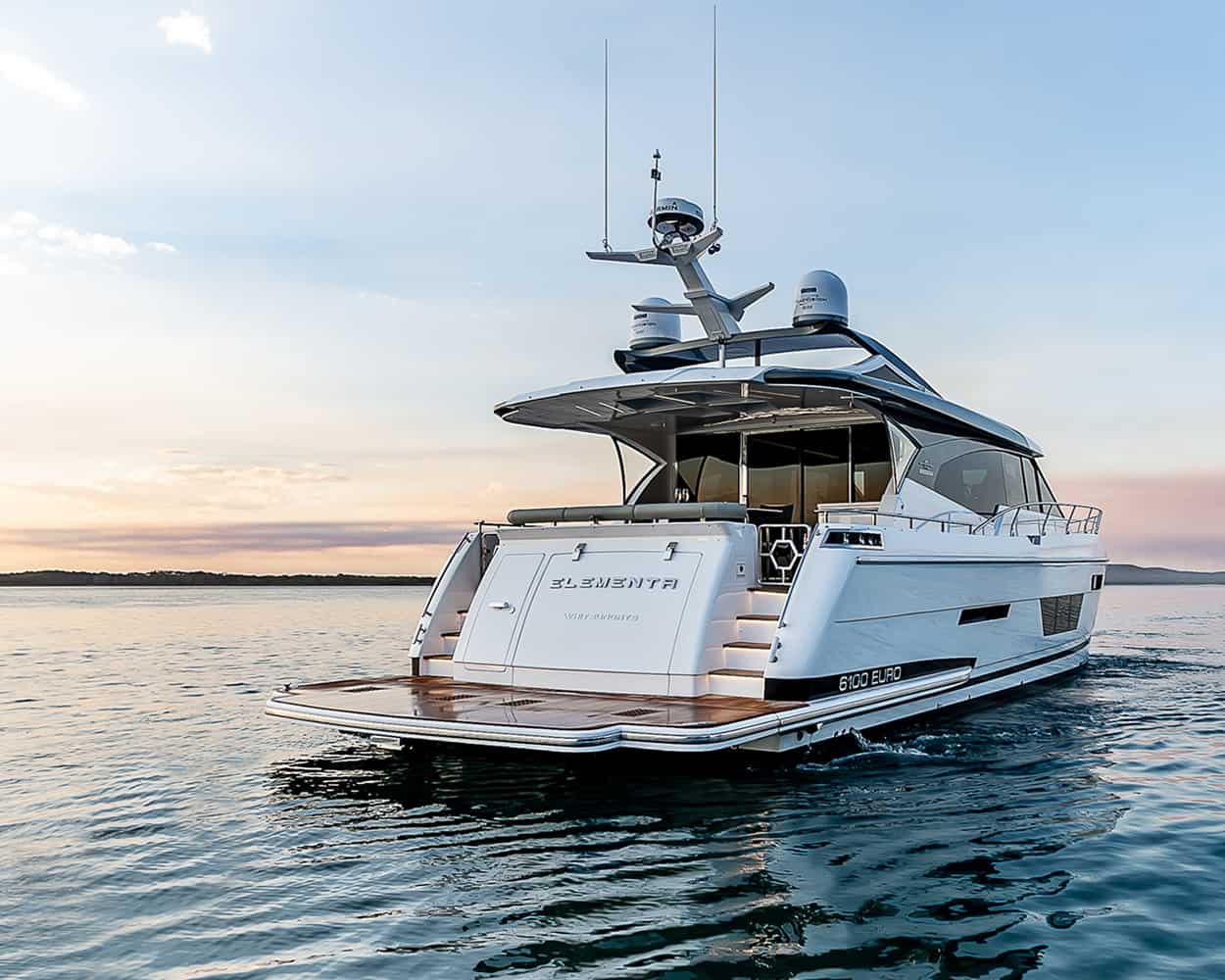 Four years ago, Kees and Pamela didn’t even own a boat. Yet today they sit in Port Douglas onboard the head-turning Elementa having completed a thrilling five-month cruise from the Gold Coast. Their Whitehaven 6100 Coupé has safely and comfortably seen them through the unchartered waters of big boat ownership and remoteness of North Queensland.

After decades of running a successful business together, Kees and Pamela decided to retire just on five years ago. Regular visitors to Airlie Beach, Kees bought a 39-foot cabin cruiser for day trips to the islands. In his youth, Kees was a keen windsurfer and his career had required good understanding of weather patterns, so he was confident to step into boating for the first time.

This boat was intended to be a past time just for him, yet Pamela loved it and so the 39-footer became a 52-footer which soon became Elementa, a new build Whitehaven 6100 Coupé with Euro Edition package.

“Our boating career has accelerated quickly with three boats in four years. Elementa is our ‘forever after’ boat though. She is the perfect size for long-range cruising as she is easily handled by Pam and me, yet there is enough room that we are not in each other’s pockets. This trip north has been a dream,” explained Kees.

Starting in their homeport of the Gold Coast in June, Kees and Pamela took their time heading north through Moreton Bay, into the Sandy Straits to Bundaberg, Pancake Creek, Yeppoon, the Keppel Island Group, Port Clinton and Keswick Island before heading into the Port of Airlie Marina.

“This is a path fairly well trodden and those we asked had a lot of firsthand information to give and we had some notable stopovers. We had a spectacular night alone in Port Clinton. There was not another vessel and a huge storm raged around us. It turned an otherwise unremarkable anchorage into something memorable. Pancake Creek was delightful. Most bypass it due to its proximity to Bundaberg yet I would highly recommend stopping over as it was idyllic. Keswick Island is also interesting,” continued Kees.

One of the most exciting and white-knuckled legs of the trip occurred about 45 minutes after leaving the Duke Islands. A thick sea fog rolled in, leaving Kees and Pamela in foreign waters with about five metres of visibility. After about five hours and 35nm later, running purely on instruments and common sense, hearing the waves break over rocks yet not seeing them, the fog lifted.

“We were never so thankful for the ‘state of art’ instrumentation Whitehaven put into their motor yachts! You don’t plan to use it all, but sometimes you simply need it,” explained Kees.

Once at Airlie Beach, Kees and Pamela took the opportunity to head back to the Gold Coast for a couple of weeks before returning for the next and thrilling part of the journey, the Whitsunday Islands to Port Douglas.

Kees offered, “Gathering information on the next leg of the trip was more difficult. Most people stop at the Whitsundays. Yet we wanted to go further and pressed on with the Cruising the Coral Coast guide in hand, and it was absolutely worth it.”

First stop was Gloucester Island, considered the northern most point of the Whitsundays. Continuing north, there were few reasons to stop until Magnetic Island whose cruising reputation is deserved. Unseasonable easterlies and bad weather forced Kees and Pamela to stop in Townsville for nearly three weeks which was not without its excitement as a boat exploded in the marina during their stay.

With better weather, Kees and Pamela continued onto Orpheus Island making use of the mooring buoys to discover this tropical island. With guidance from the local Coast Guard, Elementa waited for the right conditions to cross the Lucinda Bar and take the channel on the inside of Hinchinbrook Island.

“The Lucinda Bar constantly changes making it a tricky crossing. Under the guidance of the Coast Guard, we crossed on a rising tide and the top of the tide hit when we were midway up the channel. Even then, we only had 1.5m of water under the keel. Yet, it was spectacular and I highly recommend it to anyone cruising this area. It had rained the night before and there were running waterfalls and lush vegetation. We could have been in Hawaii. We cruised at 9 knots and after five wonderful hours we were in Cardwell,” said Kees.

Next was Dunk Island for some more perfect weather in a sheltered anchorage. Then Elementa was onto Fitzroy Island which was pleasant yet busy.

“Elementa is now berthed in Port Douglas right amongst all the 100ft plus superyachts and, without fail, all the Captains and owners come over to comment that should they choose any boat for two people to operate, they would all select the Whitehaven. The boat gets more attention than anything else in the Port Douglas Crystalbrook Superyacht Marina!” proudly stated Kees.

It is from this base Kees and Pamela are undertaking day trips to the reef and Daintree. Where to next is determined by the weather.

“All the Port Douglas locals unequivocally advise the tradewinds north of 16o are brutal and will blow well into November. We are likely to return to the Gold Coast as we would like to be back home by then,” offered Kees.

Their journey is an impressive achievement for anyone let alone a couple who began their boat ownership four short years ago. On reflection, Kees stated, “Elementa performed beautifully yet if we did this again, we would start later and would not go north of Airlie Beach until after September to avoid the winds. Then we could keep going as far north as we would want. North Queensland tourism has been hit so badly by the COVID-19 restrictions throughout the other states and everyone was grateful for our patronage.”

“On behalf of the whole Whitehaven team, we would like to congratulate Kees and Pamela. We work very hard to produce yachts which allow our owners to confidently undertake this kind of adventure in luxury. It is heartening to hear of their successful cruising,” stated Bruce Scott, Managing Director of Whitehaven Motor Yachts.