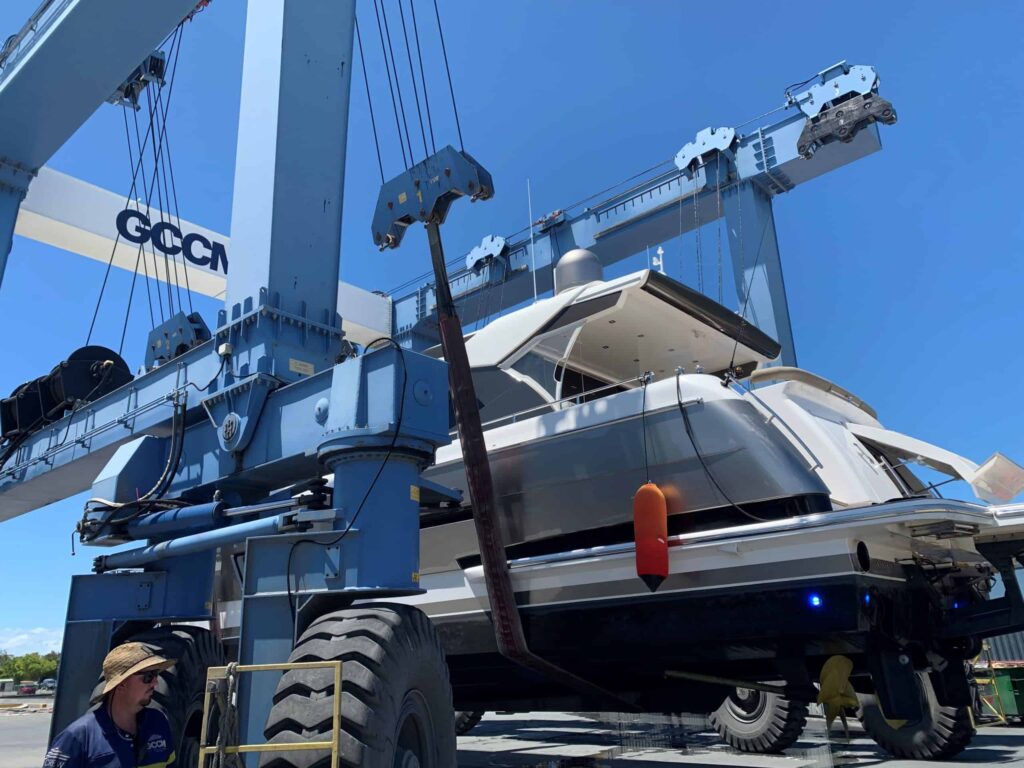 Comfort and stabilisation: Gyros are exceptionally effective in reducing the roll of a boat 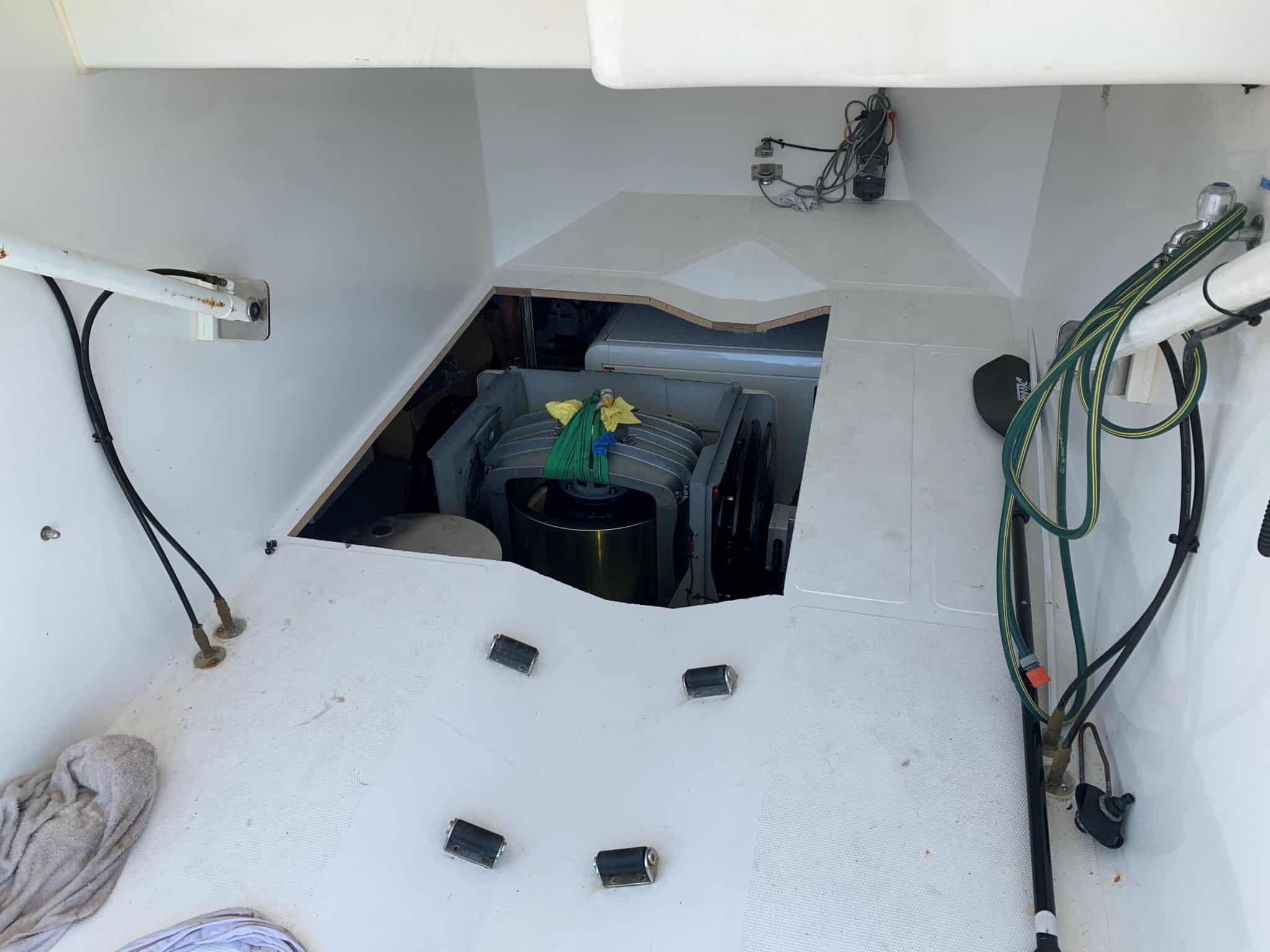 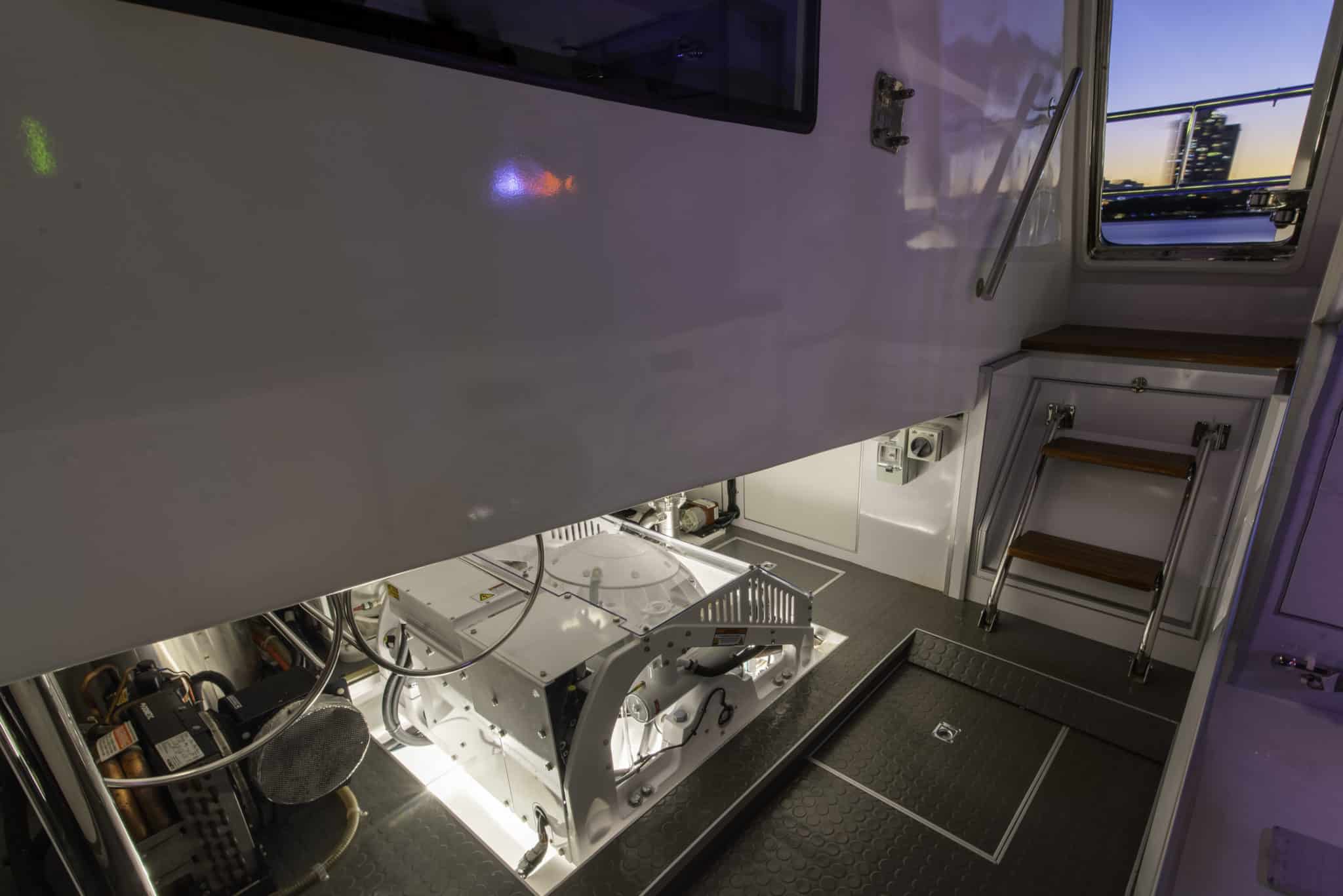 Whitehaven Motor Yachts and their owners certainly seem to appreciate the latest in gyro stabiliser technology. Working on the naturally occurring physics of precession or rotational force, gyros are exceptionally effective in reducing the roll of a boat without the need for hull piercing fins. Recently, two Whitehaven owners retrofitted gyros from two different manufacturers and here are the results.

The first Whitehaven owner to retrofit a gyroscopic stabiliser was Kieran, owner of Whitehaven Coupé 6000. Joining the Whitehaven Rendezvous to the Whitsunday Islands, Kieran and Denise experienced a few uncomfortable days. Given the amount of time they spent onboard with family, including younger children, they decided to look at stabilisation for comfort as much as safety.

Ryan Hanson, Production Director at Whitehaven, and Brendan Symons from The Whitehaven Group’s brokerage, Spectrum Marine, supported their decision to retro fit the ARG Gyro. After completing his research and due diligence, Kieran contact Anti Roll Gyro Australia, the Australian agent for the Japanese built system.

Using their stabilisation simulator to determine the best unit for the Whitehaven Coupé 6000, Damien Plahn from Anti Roll Gyro Australia recommended the ARG 375, this unit delivering the best stabilisation performance for this particular motor yacht, with the added benefit of fitting the allocated space in the engine room.

Kieran took the opportunity to install the unit at the end of 202, which was managed by Anti Roll Gyro Australia. During a simple lift and hold, Damien and his team were able to lift the ARG 375 unit with a Franna crane through the tender garage and into the custom stainless steel brackets which had already been fabricated. There was no need for time on the hardstand.

Anti Roll Gyro Australia mounted the stabiliser as close to the centre-line of the Whitehaven Coupé 6000 as possible to avoid changing weight distribution. However, Damien explained this is not always necessary. “The gyro does not need to be on the yacht’s centre line to be effective for stabilisation. Depending on the machinery and structure layout, we have placed the ARG gyros to port or starboard to offset a generator or similar and then removed any ballast.”

Next was seatrials and the day picked was challenging. The sea state off the Southport Seaway was not pleasant with plenty of large breaking waves. Kieran and Denise had invited a number of guests onboard and there were some white knuckles until the gyro spooled up and was operational. With a maximum roll reduction over 92%, and an average roll reduction of 65%, the champagne was popped and the cheese board presented while still out in the large swell.

ARG Gyroscopes cover boats from 2 to 100 tonnes and are manufactured in Japan by Tohmei, the aerospace division of Mitsubishi Heavy Industries. They come with a five year or 5000-hour warranty and are a maintenance-free unit. That is to say, each year you should complete a visual inspection to ensure there is no abnormalities but other than that, there is no need for servicing.

The next Whitehaven owner to retrofit a gyro was the owner of a Whitehaven Coupé 6100 and this time they selected a gyro from American manufacturer, Seakeeper, via the Australian distributor, Twin Disc Pacific. Like the ARG, Seakeeper has a simulator which factors in the yacht’s specifications to select the optimum unit. In this case, the owner selected the Seakeeper 9 as it met his requirements: quiet operation and water cooling were key requirements along with the anticipated roll reduction.

“The Seakeeper 9 is compact and weighs 550kg. The patented cooling system allows the flywheel to spin at an extremely high rate of speed.  As it functions in a vacuum, it is protected from the marine environment and the flywheel operates in reduced friction. This means that the unit is able to produce faster speeds for less power consumption and quieter operation,” explained Twin Disc Pacific’s Gold Coast Branch Manager, Scott Redman.

Twin Disc Pacific is a distributor of Seakeeper, managing a network of dealers, however in this case they sold and installed the unit themselves. For Whitehaven Yachts, retrofitting is a relatively simple process as the motor yachts are designed and constructed in readiness to install a Seakeeper, whether during new build construction or aftermarket.

The first steps for installation were to prepare the Whitehaven Coupé 6100 which was done in a marina berth. A hatch was removed from the tender garage and some ancillary machinery was moved to facilitate an easy install.

Once ready, the motor yacht was lifted onto the hardstand at Boat Works. A crane lifted the gyro stabiliser into the existing frame where it was bolted into place. All in all, the Whitehaven Coupé 6100 spent three days on the hardstand.

“The Whitehaven range has the cradle built in on the midline however it doesn’t need to be for the unit to function. We recommend a Seakeeper sits midships or aft but it can be either port or starboard depending on the engine room layout,” continued Scott.

Seakeeper Gyro stabilisers come with a standard two year or 2000-hour warranty with options for extended warranty and trade ins.