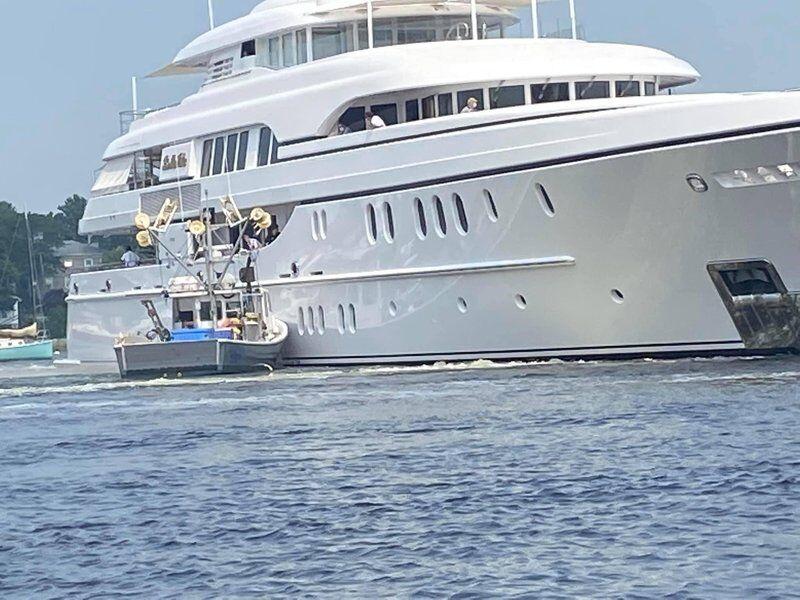 Breaking superyacht news from Newburyport, Massachusetts today. The 197-foot yacht Bella Vita left the city’s waterfront Monday afternoon, but unlike its smooth arrival a few weeks ago, the departure didn’t go as planned.

As the Bella Vita was backing away from the central waterfront – on its second visit to the city this month –  the yacht became entangled in the mooring line of the commercial fishing vessel Lady Rebecca, pulling the smaller boat against the starboard side of the yacht.

Despite dropping padded fenders along its massive side to soften a collision, the mega yacht and the roughly 40-foot fishing boat still collided, according to Harbormaster Paul Hogg.

Both vessels received minor damage but not enough to keep the Bella Vita from cruising out to the mouth of the Merrimack River, and Lady Rebecca from resuming its fishing trip Tuesday morning. No one was aboard the Lady Rebecca at the time of the incident and no one aboard the Bella Vita was injured, Hogg said.

The collision took place near the harbormaster’s office about 2 p.m. during high tide. It took about 20 minutes to separate the boats. “Luckily, eventually, everything broke free,” Hogg said.

The $60 million, Lurssen built yacht is owned by Dwight Schar, who founded NVR Inc. in 1980. NVHomes, as it is more commonly known, is one of the largest homebuilders in the country with a presence in 14 states in the Eastern U.S.

With a crew of up to 20, the Bella Vita (“Beautiful life” in Italian) can accommodate 12 passengers, each with their own stateroom. The Cayman Islands-registered vessel also has room for two 24-foot tenders and other aquatic toys.

The Bella Vita stayed in Newburyport for about a week starting July 5 before heading north toward Portland, Maine. The yacht then returned for another extended visit last week – ending with a bang Monday.

Hogg said Lady Rebecca’s mooring and mooring ball are being checked for damage and may need to be replaced.