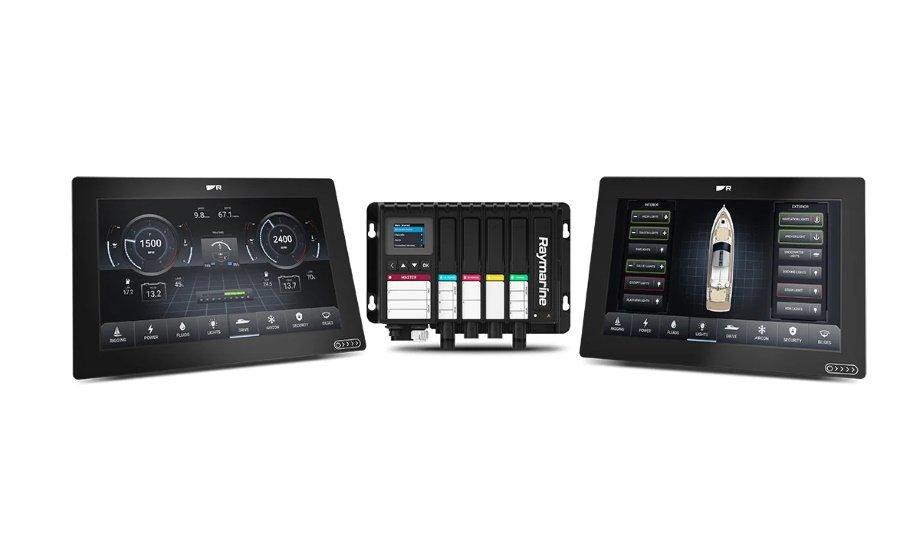 Yachtsense, a total control product from Raymarine, has been recently released and now after some weeks is beginning to be installed and utilised onboard a number of vessels. We took a first look at Yachtsense upon it’s initial unveiling which you can view here, however we thought it important to revisit the product now that it is being used in the field.

Unlike other digital-switching and control systems, YachtSense is a marine-specific system that gives boaters control over all networked devices and systems, ranging from lights and air conditioning to wine chillers and cameras. With YachtSense, they can all be controlled from a multifunction display or wireless device.

Also, while most systems are pre-configured to control networked equipment, YachtSense modules are made up of individual digital-switching controls—“bricks,” in Raymarine parlance—that perform different tasks and tackle different loads. These bricks snap together Lego-style, allowing YachtSense modules to be customized for a yacht, its equipment and its location-specific needs.

The result is that YachtSense delivers impressive levels of automation, redundancy and scalability. The system can let yacht owners power on and off—and sometimes control—onboard equipment and systems from afar.

Each YachtSense module is composed of a master and power-supply brick, plus inner bricks configured to match the demands of networked equipment. These inner bricks include low-power, high-power, reverse-power and signal-module bricks. A power-supplying bus bar runs through each module, powering the inner bricks and their downstream networked devices and systems.

While each module’s composition depends on the equipment it needs to power and control, the configurable inner bricks are always bookended by the master and power-supply bricks. “Installers can put [together] up to six bricks to make a module,” says Jim McGowan, Raymarine’s Americas marketing manager, adding that this limitation is practical. “We need to account for flexing,” such as when a boat is in heavy seas.

Reverse-power bricks give owners control over one 20-amp circuit. These bricks can reverse the polarity of a connected circuit, giving owners two-way control over items such as windlasses, electric winches, sunroofs and shades. “It can [also] sense the current—for example, on a swim platform—so that if it hits resistance, it doesn’t crunch something,” McGowan says. “This adds intelligence to the system.”

Signal bricks can monitor four networked items such as battery and tank levels, temperatures, and switches; they can also be used to control relays or devices.

While YachtSense modules are limited to six bricks, there’s no limit to the number of installed modules or number of networked devices and systems that YachtSense can control. (In multiple-module installations, the first module is fitted with a master brick while other modules are fitted with remote-module bricks.)

A separate YachtSense Connect black box is required to control the system from afar via the Ray Connect app. For example, users can spool up a Seakeeper gyrostabilizer or start up a FLIR thermal-imaging camera so everything is ready to go when they step aboard. Also, McGowan says, with the right networking, an owner could pan, tilt, zoom and view his FLIR cameras from afar.

YachtSense also supports onboard automation. “It’s why we have signal bricks,” McGowan says. For example, an owner could set automation rules so the system automatically activates the bilge pump if water is detected, or so a single screen tap closes the blinds, kick-starts the AC and queues up the stereo.

YachtSense is currently aimed at boatbuilders (its sweet spot is yachts 50 feet length overall and up) and, eventually, authorized dealers, but not DIYers. Also, YachtSense isn’t a security system, nor does it currently support vessel tracking or deliver service alerts.

At the same time, McGowan says that, “with the right programing, YachtSense should be able to interface with third-party security systems and dispatch maintenance notifications.”

While YachtSense is new-build equipment or something that’s added during a refit, it’s poised to give boaters serious control over their vessels. Better still, because there’s no preorder required, you can keep your nice vintages in your yacht’s wine chiller and use YachtSense to ensure they’re at the ideal temperature when you step aboard.